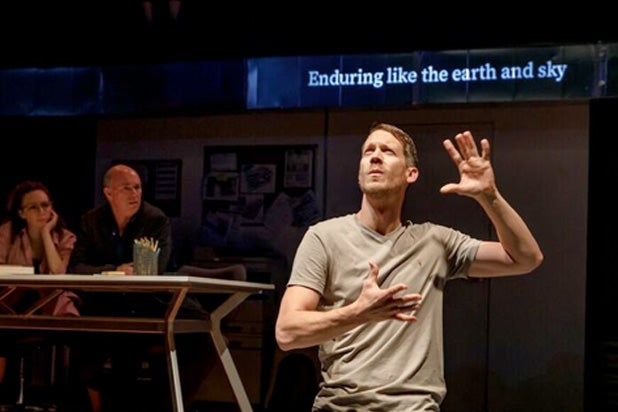 Two writers of a long-running TV series tinker with an intriguing concept. They want to develop a new show, using the Book of Job as their source material. Craig Lucas’ “I Was Most Alive With You” opened Monday at Playwrights Horizons, and it serves as a warning to anyone who thinks this Old Testament story is suitable for television, the movies or even a podcast.

Lucas’ challenge, of course, is to use that preposterous tale of a man beset with every woe God can throw at him to write a powerful drama for the stage. Early in “I Was Most Alive,” a young man named Knox (Russell Harvard) tells his adoptive family that his homosexuality, deafness and addiction are blessings that have brought him clarity.

As if there weren’t enough drama for a dozen plays, Lucas introduces a man who’s on Death Row for murdering a bunch of people. That unseen character, however, is not a member of Knox’s family. He is the adult son of a Jehovah’s Witness (Gameela Wright) who has been invited to perform American sign-language duties for Knox at a Thanksgiving dinner.

This elder’s skills are needed because Knox’s mother (Lisa Emery) and his hearing-challenged boyfriend (Tad Cooley) don’t know ASL and/or they refuse to use it. Obviously, their attitude toward sign language turns into a major topic of conversation that quickly devolves into much screaming and door-slamming, but has little to do with all the crap God is about to dump on everybody.

“I Was Most Alive” is structured as a flashback to this tumultuous Thanksgiving dinner and its grizzly aftermath. Knox’s father (Michael Gaston) and his TV writing partner (Marianna Bassham) think they can turn this unfortunate holiday into fodder for a good TV show, using the Book of Job as a template. They rarely talk about the long-running TV series they’ve been working on for years, but apparently that job leaves them time to explore new material and quote a lot from the Bible.

Bassham’s reading from the Old Testament sets up a real people-in-glass-houses moment when her character wonders aloud if a rabbi might help them interpret things. Needless to say, there’s much discussion of faith and endurance, and according to Bassham’s character, storytelling is the big thing that distinguishes man from other animals. Storytelling will get the family through this mess — if locusts don’t descend on the theater first.

Lucas makes sure that every other disaster in the Good Book shows up to test them. What should be wickedly absurd (or, at least, a very good soap opera if directed by Cecil B. DeMille) is merely mechanical as the playwright moves the characters about like stick figures in a miniature madhouse. During the intermission, Knox’s boyfriend undergoes a major conversion in attitude toward his substance abuse; more preposterous is the mother, who appears to be a radically different woman in every scene where she appears.

The complete lack of subtext might explain why most of the actors give such broad performances under the often awkward direction of Tyne Rafaeli. The simplest gestures and facial expressions appear geared for an audience that is visually challenged.

Cooley is a restrained exception, despite having to jump from druggy libertine to committed AA member. Equally understated is the legendary Lois Smith. She plays a cool-headed grandmother who bears no resemblance to her histrionic relatives.

The cast also features seven silent doubles who occupy the set’s second tier (design by Arnulfo Maldonado); they translate what the actors below are speaking into ASL. These “shadows” occasionally replicate what the other actors are doing, but most of time they simply gaze down at the spectacle below.