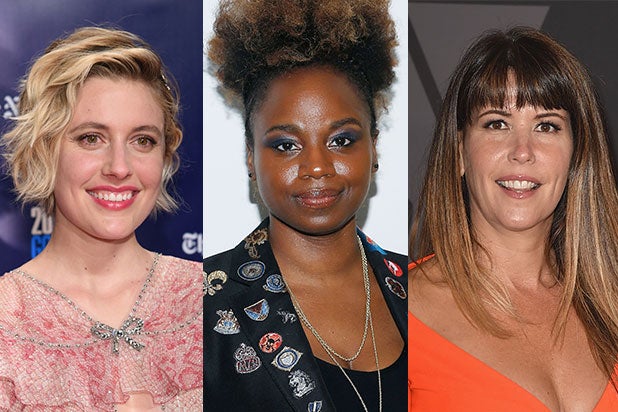 It’s been a great year for women behind the camera, but the Hollywood Foreign Press Association still didn’t nominate a single woman in the Best Director category for this year’s Golden Globes.

“Not a single woman nominated for Best Director in a year where women killed it behind the camera. Disappointing as hell,” tweeted one user.

Instead, the Globes nominated Guillermo del Toro (“The Shape of Water”), Martin McDonagh (“Three Billboards Outside Ebbing, Missouri”), Christopher Nolan (“Dunkirk”), Ridley Scott (“All the Money in the World”) and Steven Spielberg (“The Post”).

“No @PattyJenks #GoldenGlobes? Another year, another 5 men nominated for best director. Shame on you,” tweeted another, while a third disappointed Twitter user added, “Women being shut out of the Golden Globes director category is pretty much 2017 wrapped up in a s— bow.”

Gerwig directed “Lady Bird,” which is the best-reviewed film on Rotten Tomatoes in the history of the site, and the film scored various other nominations on Monday morning including Best Screenplay and Best Actress (Saoirse Ronan). And Jenkins of course helmed “Wonder Woman,” which captured audiences all over the world and gave hope to many women and young girls. And Rees directed “Mudbound,” which was also nominated in two other Globes categories.

The only female director to have one a Golden Globe is Barbra Streisand for 1984’s “Yentl.” Other nominees in the past have included Kathryn Bigelow, Sofia Coppola and Ava DuVernay.

After Margot Robbie snagged a nomination for her performance in “I, Tonya,” she told TheWrap, “In some ways we’ve really taken a step forward this year with women in this industry, from Sofia Coppola winning Best Director for the first time at Cannes and “Wonder Woman” crushing it at the box office. Obviously we’ve got a long way to go, but we really need to recognize and appreciate the wins along the way.”

In response to the nominated, Kirsten Schaffer, Executive Director of Women In Film, LA, said to TheWrap, “We are excited to see that Greta Gerwig’s film, ‘Ladybird,’ was nominated for Best Picture, Musical or Comedy – but disappointed that Gerwig wasn’t nominated for best director. Missing from the best director list are also Dee Rees and Patty Jenkins. There is a surprising lack of nominations for women behind the camera – given the critical response to films written and directed by women and TV shows created by women.”

See reactions to the snubs below.

Not a single woman nominated for Best Director in a year where women killed it behind the camera. Disappointing as hell. #GoldenGlobes2018

The main thing the Golden Globes give a nominee is visibility. Another reason why it’s depressing they went with an all male director category. Few women directors will achieve power of Spielberg, Nolan, Scott without the opportunity to be seen.

No Greta Gerwig and Jordan Peele for Best Director at the Golden Globes? No thank you, you learned nothing. Goodbye.

At least the lack of women is noticed now
Female Directors Shut Out of Golden Globes Nominationshttps://t.co/ibDynNCWsD

Always nice to see movies you love getting recognition but the Golden Globes mean even less and make even more oversights than the Oscars, not worth getting worked up over.

Things like only nominating men for Best Director with so many talented women this year- focus on that.

All due respect to those nominated and the Golden Globes are gonna Golden Globe, but to have your Best Director field be all men in a year where Greta Gerwig directed one of the best (if not *the* best) films of the year is a joke. pic.twitter.com/W7iG6QonTX

patty jenkins directed wonder woman. one of the biggest movies of the year. critical success as well.

yet the Golden Globes chose to nominate 5 men in their "Best Director" category instead. let it sink in.

YOU'VE GOT TO BE KIDDING ME. For yet another year, 100% of the best director nominees at the Golden Globes are WHITE MEN. No Greta Gerwig, Dee Rees or @PattyJenks. No @JordanPeele either. THIS IS BEYOND UNFAIR. GET OUT, LADY BIRD, MUDBOUND, AND WONDER WOMAN WERE EXCEPTIONAL https://t.co/muuJs2yc0u

Women being shut out of the Golden Globes director category is pretty much 2017 wrapped up in a shit bow.

Not one woman director is nominated? #GoldenGlobes pic.twitter.com/C4ZV70hRDu

The biggest disappointment of the morning: No Greta Gerwig. No Dees Rees. No Patty Jenkins. The #GoldenGlobes nominated five men for best director.

No @PattyJenks #GoldenGlobes? Another year, another 5 men nominated for best director. Shame on you.