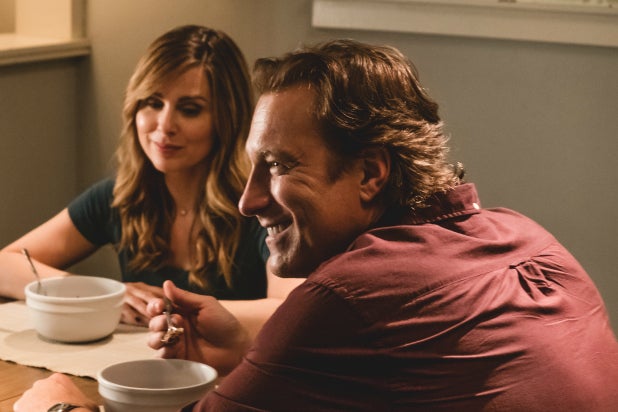 The low-key faith-based film “All Saints” is thankfully devoid of miracles, melodramatic sermons and religious visions. It also skirts some predictable outcomes.

While the script by Steve Armour is not without clichés and situation comedy moments, and some characters seem somewhat miscast, the story (based on true events) is intrinsically compelling. The non-religious will find its celebration of our humanity more appealing and accessible than other movies in this genre that rely more heavily on scripture and signposts from God.

The film focuses on the struggling Episcopal All Saints Church, in Smyrna, Tennessee: The congregation has dwindled, and the church is suffering financially. Newly-minted Episcopal priest Michael Spurlock (John Corbett) has been brought in to oversee things while the church is up for sale. What is most fascinating — and unfortunately least explored by “All Saints” — is the culture and plight of some of the church’s newest congregants, a group of needy political refugees from Myanmar, formerly Burma.

As directed by Steven Gomer (“Sunset Park”), the film is hampered by uneven and sometimes awkward pacing. A few emotional scenes are overly telegraphed. When a sad event occurs, the violins literally kick in.

Moving with his wife Aimee (Cara Buono, “Stranger Things”) and son Atticus (Myles Moore) to rural Tennessee, temporary pastor,Spurlock’s job is to help congregants transition to other area churches. Essentially he’s a lame-duck pastor who preaches to a small gathering of the converted.

Spurlock has a short fuse and a sizeable ego. His down-to-earth wife urges him to tone down his “lone gunslinger” tendencies. He doesn’t “do well with bosses,” he says. Apparently, he’s not crazy about ornery old locals either. Spurlock quickly locks horns with Forrest (Barry Corbin), a mildly cantankerous Vietnam vet and widower who sees him as a slick huckster. Others in the congregation initially mistrust him as well.

The story livens up about a third of the way in when the Burmese refugees show up at “All Saints” for spiritual healing. They are ethnic Karen farmers, and also baptized Anglicans, their religious affiliation dating back to when Burma was under British rule.

The film’s best performance belongs to Nelson Lee as Ye Win, a kind and stoic refugee who volunteers to translate Spurlock’s weekly church sermons. He and Forrest bond over war stories. Forrest spots a photo of Ye Win, and a firearms discussion ensues that seems targeted directly to a particular gun-toting Bible belt demographic.

When Spurlock gets to know Ye Win and finds out that many of the immigrants were farmers in their homeland, he gets an idea. Or rather, he thinks he hears God speaking to him and guiding his hand. The divine inspiration consists of asking the small congregation to help farm the 100+ acres on which the church sits. Then, with the money earned from selling the crops, the church can both remain open and help feed the refugees.

The film bogs down with too many montages of people working in the fields instead of focusing on character development of the refugees. Gomer wastes scenes on some sassy American types, when he should have focused on the character arcs of the Karen churchgoers, most of whom play themselves in the film.

The violence and tragedy the Karen refugees endured in their native country’s civil war is alluded to, but not developed sufficiently. Only once do we get a glimpse of the culture clash between the Karen and local Southerners, when the police are called after a boy runs into the street. (The boy’s parents fear that the police will take their son away.)

Casting Corbett as Spurlock, a traveling paper salesman turned Episcopal cleric, was a questionable proposition. The thinking seems to have focused on making him a distinctly flawed Everyman, but the character’s spiritual calling doesn’t always come across. We’re supposed to be rooting for Spurlock, but he’s often too self-absorbed to cheer on.

As played by Corbett, Spurlock can be cocky and holier-than-thou. He goes to a dinner of business leaders and winds up yelling at them: “How can you sit there chewing $30 steaks and let our people starve?” His heart seems to be in the right place, but he does have some anger-management issues. When he learns that Ye Win didn’t turn to Spurlock for guidance after his wife left him, the cleric lashes out at the poor man, who is already suffering from his wife’s abandonment. You can’t help but wish that the ever-polite Ye Win would blurt out, “It isn’t always about you!”

His smug sense of righteousness rears up again when Spurlock chases away potential buyers of the church grounds, no doubt envisioning himself in a messianic role, akin to Jesus casting the moneychangers from the temple. “Get out!” he screams. “Go find another church to bulldoze!” It’s not like they were trying to wrest the church away; after all, a Bishop’s council had already decided the sale was the only solution for a congregation that had all but disappeared.

The film’s major saving grace is how it seeks to be inclusive in its depiction of Christianity. Through a collective endeavor, a sense of community and faith is reinforced. But one does come out of “All Saints” with a burning, non-theological question: In this digital age, who knew there were traveling paper salesmen?