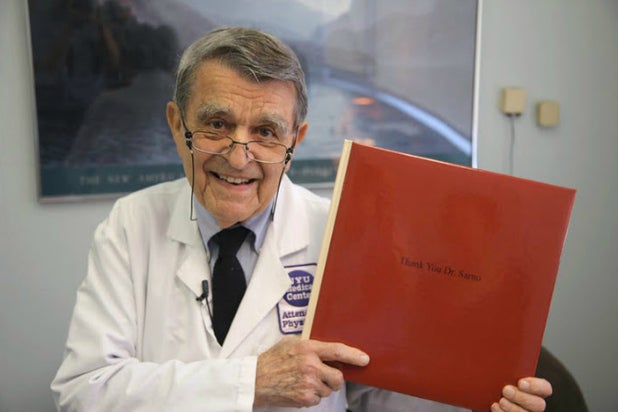 Should you ever see “All the Rage (Saved by Sarno),” you’re going to want to embrace it. (That’s as much of a prognostication as it is a warning.)

The directors, David Beilinson, Michael Galinsky and Suki Hawley, all seem like warm, emotionally present people. Sometimes their movie, which unmistakably comes across as a labor of love, feels that way too: Alive and engaged. However, it’s hard to work past the project’s limitations, both creatively and budgetary. “All the Rage” is a documentary with a thesis and not much else.

The central case being made is for Dr. John Sarno, a revolutionary practitioner who devoted his life to the pain epidemic born in America. More specifically, Sarno is responsible for developing TMS (Tension Myositis Syndrome). This psychosomatic condition, Sarno contends, is the root of various illnesses regarding physical discomfort, especially in the back. Sarno’s protocol for treating this condition is, essentially, acceptance and introspection. You must first recognize that “I do have structural abnormalities,” he says, and “that that’s okay. The mind and body are connected.”

The next step includes an exhaustive unpacking of one’s psyche. “The mind holds onto the idea as a physical problem,” says Sarno. But he believes something like chronic back pain is anything but. It’s a psychological problem, stemming from unresolved issues in our subconscious.

All of this sounds a bit woo-woo when read in a film review. In fact, it sounds a bit woo-woo when Sarno speaks, too. That’s sort of the movie’s point. Despite unending testimonials from celebrities like Larry David and Howard Stern, what Sarno is offering seems to good to be true. “This is not alternative medicine,” he insists. You’d like to believe this. By the end of “All the Rage” you may be just be a convert. If that’s the case, then tally a mark in the win column for the movie.

What I found was something a little messier to grapple with. Sarno, who passed away in June, a day before his 94th birthday, is worthy of our time. He’s a dynamic central subject for a documentary. That much is clear. So why doesn’t “All the Rage” hit harder?

On the surface, the diagnosis is simple: this could just as easily have been a well-reported segment on “60 Minutes,” or perhaps an episode on Malcolm Gladwell’s beloved podcast, “Revisionist History.” You could see Gladwell’s eyes lighting up upon meeting Sarno, a renegade MD unafraid of blazing his own trail.

And yet while knocking the movie for its outstretched 94-minute running time is fair, it doesn’t paint the full picture. The heart of “All the Rage’s” issues, I believe, are with Galinsky. In an attempt to give his film depth and personality, Galinsky often pivots back and forth from Sarno’s office at NYU Medical center to his home. Splayed on the floor, we hear Galinsky yelling. He’s one of the 100 million (per the film) suffering from chronic pain.

For a variety of reasons, this is all hard to watch. Without Sarno’s inevitable intervention, who knows where Galinsky would be today? But there’s something unfocused and lackadaisical about the director’s internal probing. He repeatedly tries to open up his world to us — childhood, parents, marital strife, professional pressures. Few have managed to pull this off successfully in the documentary format without being trite or egotistical. Sarah Polley’s spellbinding “Stories We Tell” comes to mind. Galinsky and his cohorts lack the ingenuity of Polley, though. Ultimately, his “personal journey” is more admirable than interesting.

This narrative fixation causes other issues. By turning the camera inward, Galinsky forgets to ask more of his core subject. Sarno built an inimitable career. Why not dig deeper? There’s a chance the seasoned doctor is a little fatigued by it all. Decades of fighting against the status quo in a profession that chooses to not acknowledge your existence will do that to you. I got the sense Sarno was open to answer anything, if properly asked.

Those big questions never come. Sarno urged his patients to be mindful and curious. Someone should’ve encouraged the film’s crew to do the same.

Here’s an example: Toward the end, Galinsky is asked to speak at his brother’s wedding. Michael stands in front of the crowd, reciting the speech his late father gave to him at his wedding. It’s a tender monologue about rolling with the punches, taking life as it rapidly comes at us. His eyes begin to well up as he reads the note aloud. He’s flooded with emotions. For a moment, so are we.

Then, without missing a beat, the film cuts to Michael’s narration. “Making it through that speech was one of the hardest things I’ve ever done,” he says. “But once it was over, I felt lighter than I have in a long time.” Less than two seconds after watching Michael bravely “make it through” that speech, he’s telling us how hard it was to make it through that speech. We know it was difficult. We saw. We felt it. Much of “All the Rage” does not need explaining, and yet it insists on elementary explanation.

Days after I watched “All the Rage,” my opinion started to take shape. I’ll be honest, though, even writing this now I feel some reluctance to criticize a movie I believe means well, an endeavor with pure intentions. Sarno, especially, comes off as a divine creature and thoughtful force in the world. If “All the Rage” does nothing else, it will at the very least serve as an widespread introduction to this revolutionary doctor.

Yet there is something frustratingly artless about the movie’s execution. “All the Rage” was supposed to be about Sarno’s story. Instead its script contains dueling protagonists, competing for screen time. The team needed to pick a lane here. Instead, Galinsky and company find themselves in the middle of the intersection, blindsided by incoming traffic. It’s a movie about two people that ends up being about no one at all.