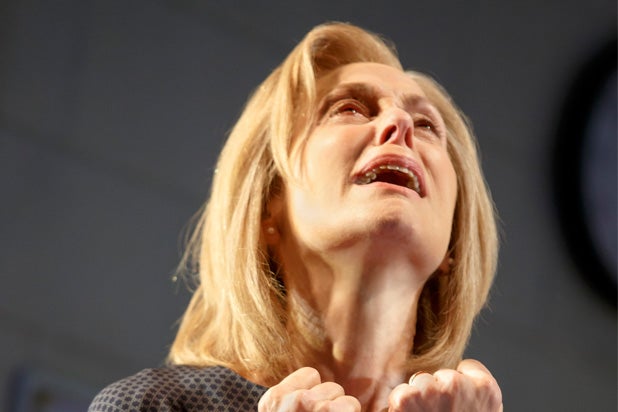 Neil LaBute is destined to be the first playwright to place an iPhone on stage and have an audience listen to his new play, “All the Ways to Say I Love You.” Since his promising early works “In the Company of Men” and “The Shape of Things,” LaBute has gotten increasingly skimpy with his considerable talents.

“All the Ways to Say I Love You” stars Judith Light and opened Wednesday at the Lucille Lortel Theatre under the auspices of MCC. Ushers (and a press release) tell us it’s 60 minutes without intermission.

Actually, “All the Ways” is only 60 minutes if you count the curtain going up 10 minutes late. There used to be a time in the theater when short one acts were put on a double bill. Think Edward Albee’s “The Sandbox”/”The Zoo Story” and Samuel Beckett’s “Krapp’s Last Tape/”Endgame.”

Soon into LaBute’s mini-monologue, a teacher (Light) begins to stutter whenever she mentions one of her students. That stutter is the subtext LaBute provides to tell us that the teacher’s light, upbeat chatter will soon erupt into some really dark drama.

The teacher addresses us from what appears to be her office at a high school. Unlike Sue Mengers’ living room in John Logan‘s “I’ll Eat You Last,” you will soon wonder what you’re doing in this high school office because you don’t want to be in this office listening to a teacher. Are we her collective therapist? Do we get to charge her shrink rates?

Something approaching a spoiler: The teacher’s an adult female and the unseen student is male. We learn this within the play’s first couple of minutes, so there’s no suspense as to what she is about to confess.

Let’s just say that it is a LaBute play, meaning that someone is going to get spanked really hard for having some pretty terrific sex. As paddles go, LaBute’s is much bigger than even Arthur Miller’s.