Originality has never been the namen “The Divergent Series,” a YA hodgepodge of dystopian themes and pillow-lipped teens, and with this third entry, it shows no sign of changing course. “The Divergent Series: Allegiant” brings back the same cast of characters to do more or less exactly what they did in the previous films, only this time in sets with more sci-fi gloss than postapocalyptic grunge.

Shailene Woodley is back again as Tris, the lowly girl from Abnegation turned guerrilla leader — a.k.a. The Specialest Girl in the World, a.k.a. The One. Where last we left her, she and her band of rebels went and upended the whole governing system, the one that divided people into factions like Dauntless (the soldiers), Amity (the farmers), and Erudite (the smug).

Tris and her boy, Four (Theo James), don’t fit into any of those factions: They’re Divergents, and the film picks up just after they’ve unlocked a secret prophecy revealing that there’s a whole functioning society outside of the walled-in Chicago previously thought to be the last glimmer of life on Earth.

So our messianic heroes hightail it over the wall, joined again by Tris’ brother, Caleb (Ansel Elgort), the double-dealing Peter (an enjoyably smarmy Miles Teller, whose role has greatly expanded as his star has risen) and the loyal Christina (a barely-there Zoë Kravitz, whose role, well, hasn’t).

The character beats are set in stone by this point, and “Allegiant” director Robert Schwentke (“R.I.P.D.”) sticks to them like a flight plan. Four broods, pouts and then kicks ass, while Tris is earnest and athletic. Peter betrays them every chance he gets, just as he has many times before, but the collected half-billion at the box office of those previous films makes a powerful case for forgive and forget.

Our wanderers don’t spend long in the wild, however. They rather quickly make it the Bureau of Genetic Welfare, a scientific outpost and hybrid of the USS Enterprise and Apple Store, where many shocking secrets will be revealed. In keeping the best recurring element of the series, the Bureau is staffed uniquely by gym-toned twentysomethings and one respected character actor. (This time, Jeff Daniels.) 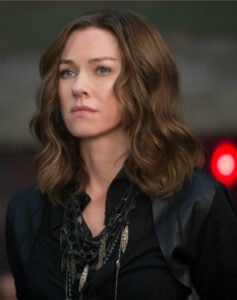 Noah Oppenheim (“The Maze Runner”) and Adam Cooper and Bill Collage (“Exodus: Gods and Kings”) adapt  Veronica Roth‘s novel of the same name, but not, of course, the entire novel: Once again producers have divided the final book in a YA series into two separate films, and that padding really shows once the film moves wholly into the digitally embellished confines of the Bureau. Simply put, the film’s momentum just crawls to a stop, during which the normally active heroine is reduced to a vehicle for received exposition.

Schwentke and the three screenwriters try to keep the action moving — back in Chicago, a factional civil war is brewing between Naomi Watts and Octavia Spencer, hamming and slumming both — but the main characters remain peripheral. Though the director stages several scenes with real visual flair, including one memorable sequence where we see the effects of a powerful weapon from the perspective of the man it’s being used on, nothing can keep the franchise beast from consuming the film.

Stuck in the green-screen world of the futuristic Bureau, Tris and gang spend the majority of the film watching the big action on virtual reality screens and learning important revelations that will doubtlessly come into play — in the next installment.

The upending revelations of the previous story, and need to replace departing villain Kate Winslet with another big bad, results in a film that’s mainly focused on reshuffling the board and putting pieces in play, doing so with a series of long speeches in front of poorly rendered vistas. Daniels will no doubt make a perfectly respectable antagonist, one movie from now, but the green-screen backdrops and dry exposition with which he’s saddled hardly provide enough scenery to nibble, let alone chew on.

Indeed, the drive to divvy up one book into two films results in a narrative that is two parts set-up and no part payoff. While the screenwriters manage to get the leads back into the walled-up city for a rousing third-act rescue, “Allegiant” ends up feeling like a mid-season climax to serialized TV drama. The pieces are in play, the wheels in motion. Stay tuned, loyal viewers, and you’ll get your answers next year.