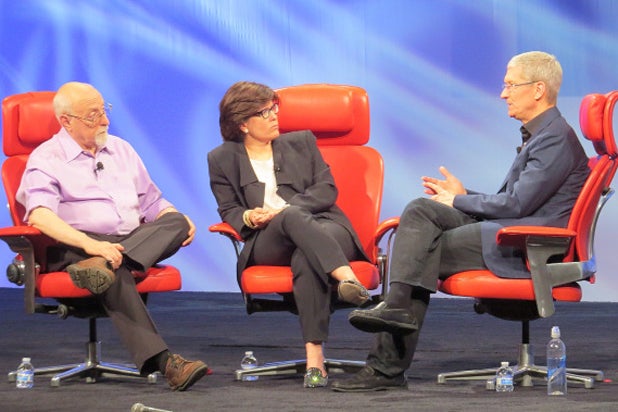 Mossberg, the influential technology columnist, will be leaving The Wall Street Journal after four decades. He and Swisher are currently looking for a new investor, and an individual with knowledge of the situation told TheWrap that NBCUniversal and another “big media company” are in talks.

In its statement, Dow Jones said it would be expanding its technology coverage and that it would launch its own technology conference. It was unclear what would happen to the AllThingsD brand, one of the most successful annual gatherings of technology leaders in the space, which is owned by Dow Jones.

“We have not yet finalized plans with respect to the brand,” a spokesman from Dow Jones told TheWrap.

Also read: Facebook’s Zuckerberg Has Meltdown Over Privacy at AllThingsD

Either way, Swisher is confident moving forward. “We have been running it like a startup for a decade, so we will be fine,” she told TheWrap in an email.

Dow Jones editor in chief and Wall Street Journal managing editor Gerard Baker said in a statement that the company will also move forward, with a “new initiative [that] will be an integral part of The Wall Street Journal and will be rooted in the Journal’s reputation for excellent, fair, objective, reliable and stimulating journalism.”

He also offered a “heartfelt thanks” to Mossberg in the statement, but notably did not mention Swisher, the hard-bitten reporter with some of the deepest sources of any technology reporter, anywhere. Swisher is not a staff member of the Journal, but has had more than a decade partnership with Dow Jones.

Speculation that the AllThingsD/Dow agreement would come to an end has been rampant for months. Reuters reported in February that Swisher and Mossberg were considering leaving Dow Jones at the end of the year, and Farhad Manjoo joined WSJ from Slate as a tech columnist in early September — leading many to assume he’d replace Mossberg.

Swisher and Mossberg launched AllThingsD in 2003, and it quickly became a must-read tech site. Its annual “D” conference is a Who’s Who of Silicon Valley that makes millions of dollars annually for the journalists and Dow Jones. The conference brand had expanded into a media version and to Asia in recent years.

The site’s partnership agreement is set to end at the end of 2013.