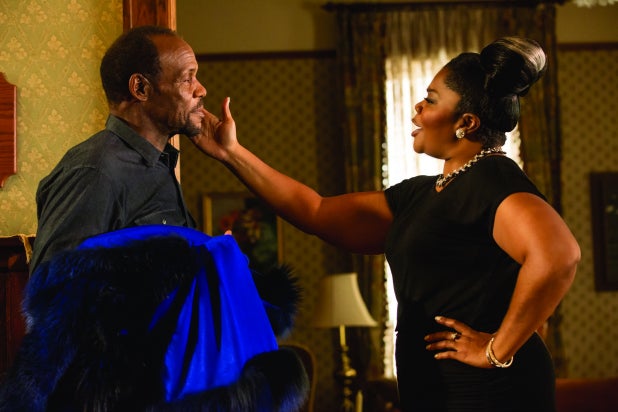 If I’ve learned anything about Christmas movies after years of research, it’s that the ones we flock to every December often provide us with heaping helpings of comedy, poignancy and the resolution of long-standing family arguments. Those same classics tend to get roasted by film critics the first time around for being sappy or sentimental or contrived, as though those weren’t exactly the qualities that so many of us look for in a holiday movie.

Anyone can whip the basic beats of a Christmas tale into a movie — go turn on the Hallmark Channel right now for a quick example — but it takes a degree of skill to make the comedy truly hilarious and the moving moments genuinely meaningful, and writer-director David E. Talbert (“Baggage Claim”) unlocks every door in this Advent calendar with precision.

It’s the first Christmas for the Meyers family following the death of the matriarch, and while widower Walter (Danny Glover) wants nothing more than to bring his four children and their families together for the holidays without any arguments, keeping the peace will be no easy task. Joining him in his beautiful Birmingham, Alabama, home is his outspoken sister-in-law May (Mo’nique), who’s spent decades 20 feet from stardom as a back-up singer; daughter Cheryl (Kimberly Elise), a dentist with two kids and a husband (J.B. Smoove as Lonnie) with a roving eye; son Christian (Romany Malco), an aspiring politician; daughter Rachel (Gabrielle Union), a divorcée with a chip on her shoulder and a daughter of her own; and youngest son Evan (Jessie T. Usher, “Independence Day: Resurgence”), a star college football player.

Naturally, there are any number of mini-dramas afoot, from Cheryl and Rachel’s longstanding enmity to Evan’s addiction to painkillers to Christian’s backers wanting to close down a homeless shelter that once took in his late mother to neighbor Malachi (Omar Epps) and his hopes of rekindling his high-school relationship with Rachel. The barbed dialogue zings back and forth in wildly funny ricochets, and Talbert — angling hard to be 2016’s Most Improved writer-director – stages some wonderfully recognizable agonizing family moments, from May’s inedible buffet of world cuisine to a dinner scene in which Lonnie’s babbling paramour Jasmine (Keri Hilson, “Riddick”) is the last person at the table to realize that she’s sitting next to Lonnie’s wife.

“Almost Christmas” gets the sad stuff right, too — there’s an ongoing story element about the search for the mother’s famous tin box of recipes, and of Walter’s desperate attempts to recreate her sweet potato pie, and the film reminds us how food can be just as powerful as home movies or photographs when it comes to summoning the presence of someone we’ve lost. Family get-togethers, especially around the holidays, so often are reminders of who is no longer sitting at the table with us, and the movie nails that note of sorrow that can appear even in the most joyous occasions.

Talbert’s script perhaps bites off a bit more than it can chew; the homeless-shelter stuff gets resolved pretty briskly, and the movie seems to understand Evan’s pill habit at a “Valley of the Dolls” level, but the ensemble cast is so strong that they smooth out the rough spots. Old hands Glover and Mo’nique strike an easy rhythm and have great chemistry, and once again Union steals the show, whether she’s sparring with Elise or resisting (or not resisting) Epps’ charms. (If only talented supporting players Nicole Ari Parker and John Michael Higgins were given more to do.)

Yes, “Almost Christmas” has its heart set on being heartwarming, and if that’s a problem, you should probably avoid major-studio movies with the word “Christmas” in the title. For the rest of us, this is a satisfying holiday concoction that has the potential to be around for many Decembers to come.