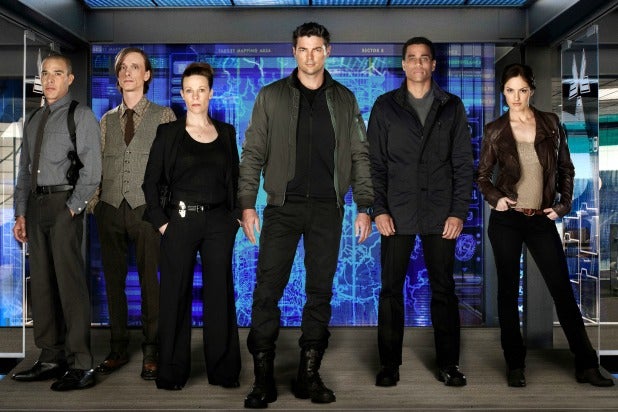 Technology seems designed to make us more reliant on it, and less connected to humans. That’s a good business model – What? You’re still using the iPhone 4? What about Siri? – but it doesn’t do much for the relationships that sustain us. The sleek phones our friends tap on at dinner insult us, no matter how hard we try not to resent them.

“Almost Human” creator J.H. Wyman says the show sprung from his frustration at his 21-year-old daughter texting him instead of calling, so he could hear the tone of her voice. It’s a lovely starting point for a show.

“Almost Human,” debuting Sunday on Fox, makes a strong case for getting off the newer-is-better assembly line and taking a minute to work with the battered machines we already have. Think “Blade Runner” crossed with “Zen and the Art of Motorcycle Maintenance,” with a lot more shooting.

It isn’t Luddite. It accepts that some technology is good. But it finds middle ground by suggesting that newer, faster and sleeker aren’t always better. A patched-together Millenium Falcon is better than a nasty, efficient fleet of Tie Fighters. The blood, sweat and tears we put into fixing it up and dealing with its quirks imbues it with a little of our humanity. The “Star Wars” analogy is in order because “Episode VII” captain J.J. Abrams executive produces.

But “Blade Runner” is the much bigger influence. The gorgeous look of the Fox cop drama owes a huge debt to the rainy Los Angeles of Ridley Scott’s film, and the show’s cops are an obvious offspring of its human-looking replicants.

The most human of the droids is Dorian, sympathetically played by Michael Ealy. He’s a dead-end in a line of machines assigned to human partners to help drop a crime rate that, in the near future, has spiked 400 percent. At one point a bunch of newer model droids crash, and he’s the only one left standing.

“They run on a different frequency from me,” he says. “Sometimes new technology isn’t better.”

“Almost Human” has a lot going on – too much, in the pilot – but works best as a show about Dorian desperately seeking human approval. That’s the best conceit in the show: What if all these new technologies really, really wanted us to like them?

(Siri obviously doesn’t care. She’s particularly prissy when you try to get her to change her name to something a little more fun, like, say, Threepio. Try it.)

I didn’t start to really like “Almost Human” until it’s subtle last line, the one that made me see the show as the story of a robot who wants love. Or at least friendship and respect. Dorian is a loveable R2-D2 in a sea of Siris.

What makes him different is that he’s been designed not just to regurgitate information, but draw conclusions. To be a detective, in other words. When it comes to sleuthing, there’s a thin line between understanding and empathy. Dorian has empathy, and wants it back.

I’m willing to give it to him. His partner, John Kennex, is more hesitant, thanks to an incident at the start of the show that makes him really hostile to robots. Kennex is played by a very good Karl Urban, the only sane person in a world overrun by machines.

You and me both, buddy. Now to make peace with them.