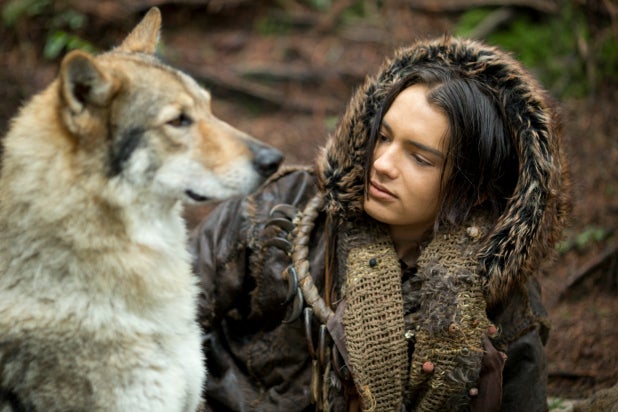 Everyone loves a dog who can play basketball, learn karate, save children from wells or help Tom Hanks solve mysteries. Heck, everyone seems to love dogs, period. But where did all that love come from?

Albert Hughes’ “Alpha” tells the story of the first wolf who became man’s best friend, in a film that could have been cheap and saccharine — like so many dog films before — but instead feels almost, but not entirely, mythic.

“Alpha” stars Kodi Smit-McPhee (“X-Men: Apocalypse”) as Keda, a teenage caveman from thousands of years ago, whose father Tau (Jóhannes Haukur Jóhannesson, “Atomic Blonde”) is chief of their tribe. Keda is about to embark on his first hunt, and along the way earns his tattoo of the Big Dipper (which might be important later) but also earns scorn for his inability to kill a captured boar.

We learn early on that Keda’s father and his mother, Rho (Natassia Malthe, “Battle Drone”), are worried about his future. Tau wants Keda to lead with his spear, and Rho wants him to lead with his heart. Meanwhile, Keda looks on from across the tent, making no contributions to the conversation, and indeed, never quite mentioning how he feels about being pulled in two directions.

“Alpha” is actually a very quiet film. The dialogue is minimal. We watch these people on their hunt, walking vast expanses under stars unfiltered by haze or light pollution. And it all looks impossibly gorgeous, thanks to the expert cinematography by Martin Gschlacht (“Goodnight Mommy”).

Keda is injured and thrown off a cliff in the middle of a stampede, and Tau mourns for days before leaving his side. Wouldn’t you know it, that’s when Keda finally wakes up and begins the perilous journey home. He’s alone, he’s broken, and he’s hunted by every animal under the sun.

When Keda gets treed by a pack of wolves, he injuries one of them. The pack leaves the injured wolf for dead, and Keda can’t bring himself to kill it, presumably because he recognizes the dramatic parallels between their plights. He slowly nurses the wolf, and himself, back to health. And so begins their epic journey of discovery, friendship, adventure, and so on and so forth.

“Alpha” is not a complicated movie. The story is straightforward and directional, a direct but difficult path from danger to safety, punctuated by life-threatening adventures. What could have made other storytellers stir-crazy seems to have unleashed something philosophical in Albert Hughes. In his solo directorial debut, he uses the space between Keda and his home, and the space between one side quest and the next, to visually explore the vastness of the world before mankind restructured it.

The sheer vastness of the world back when there was less stuff in it gives Hughes and Gschlacht the opportunity to paint glorious compositions, and they smartly take three dimensions into account. “Alpha” uses 3-D technology better than most other movies, allowing the audience to drink in the depth of the frame and to appreciate storytelling elements on multiple planes. The film sometimes even compresses the image to nearly silhouette flatness, to provide dramatic contrast and to emphasize the length of their journey instead of just their isolation.

Smit-McPhee capably captures the naïveté of young Keda, but his transformation to adulthood is a bit more academic. We understand what he’s been through, but as an actor, he doesn’t completely evolve in the way this epic journey probably should have transformed him in order to hammer the point home.

The same cannot be said for the wolf, Alpha, which is brought to remarkably plausible life by the film’s visual-effects team. It’s a fantastic and transformative performance, in which the animal’s body language is strikingly clear without being unnaturally anthropomorphic. When Keda tries to pet a wolf for the very first time, you can practically hear Alpha say, “We’re not there yet.” And later on, when Keda throws a stick at the animal in frustration, Alpha practically yells, “You dropped your stick! I’ll get it!”

“Alpha” may have family-friendly intentions, but the violence is palpable, and it’s a little inconsistent in its messaging. The story wouldn’t be told if Keda didn’t have a soft spot for animals, but sometimes he can’t bring himself to kill an animal, and at other times he has no compunction about it whatsoever. It’s hard to tell where Keda stands as a character and what the whole movie’s attitude is about mankind’s symbiosis with nature.

Do we only care about other creatures when it’s in our own best interests? If so, is that good? Bad? Help us out here, “Alpha,” you have the floor. You’re using your stage time to tell a vivid story with sharp and strikingly beautiful images, but you’re not really tying it together very well thematically.

“Alpha” comes close to greatness, specifically that rare kind of greatness that we reserve for timeless epics, or at least gorgeous Frank Frazetta illustrations. The story and protagonist aren’t quite rich enough to take it to the next level. But the film comes close to achieving its lofty ambitions, and provides us all with a new, fantastically photographed, almost amazing fable.