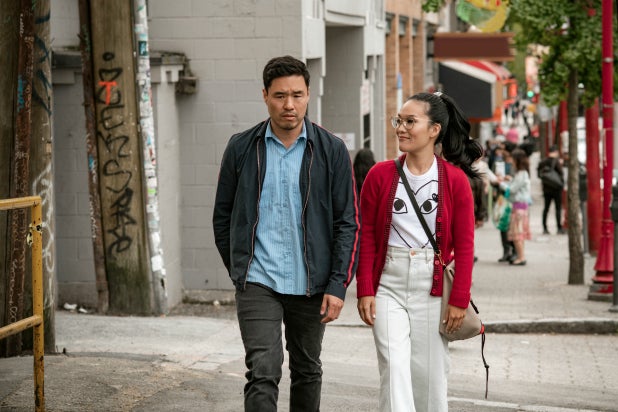 “Mahogany” has long been regarded as a classic romantic film that has pretty much everything you crave in the genre: sex, luxurious fashion montages, and a hot couple. But you know what stops it from being a perfect movie? The ending, which finds Diana Ross as a style maven at the top of her game giving it all up to be at her man’s (Billy Dee Williams) side as he realizes his political dreams.

It’s been more than 40 years since that film’s release, and screenwriters have only recently begun to realize that a female character sacrificing herself for a man is tired as all get out. That’s what makes director Nahnatchka Khan’s “Always Be My Maybe” that much more enjoyable because it flips that dynamic on its head.

Ali Wong stars as culinary superstar Sasha Tran, who puts her glitzy Los Angeles lifestyle on pause to return to her native Bay Area to open up a new restaurant. But while on this three-month excursion, a temporary detour ahead of her impending nuptials (to Daniel Dae Kim as her pretentious fiancé), she bumps into Marcus (Randall Park), her childhood bestie who was also the guy she lost her virginity to in the back of his Corolla. (Wong and Park co-wrote the script with Michael Golamco).

Watch Video: Ali Wong and Randall Park Are Adorable Together in Rom-Com 'Always Be My Maybe' Trailer

To Sasha’s surprise, Marcus is still driving the same car, living in his dad’s house, and playing in coffee shops with his high school band. It’s like time has stood still for him almost 20 years later, while Sasha’s life has accelerated. But it’s all good, because even though the two have significant others (Marcus has latched on to a hippie, spam-loving girlfriend) and couldn’t be more different now, you just know that by the end of this film something will bring them together.

True to that same rom-com film formula, though, other people get in the way at first, even after Sasha’s highfalutin’ groom-to-be predictably bails on her. Enter one douchey yet sexy AF Keanu Reeves, whose character spends maybe a few hours away from Sasha then unironically tells her, “I’ve missed your thighs.” Seriously, shout out to Rich Delia’s impeccable casting, which makes this moment even more hilarious and perfect.

What’s especially great about this point, and really about all of “Always Be My Maybe,” is that gives its Asian female lead sexual agency. She’s not just waiting around to be desired by the next self-involved celebrity; she’s choosing her own men — albeit all bad ones, but they’re on her terms. That’s a rarity in films that have too often portrayed Asian women as sexually repressed.

Much of that subversive approach emerges from Wong’s naturally bold personality. If you’ve seen either of her two Netflix stand-up specials, “Hard Knock Wife” and “Baby Cobra,” then you already know that she is unafraid of raunchy, bitter, in-your-face comedy. It makes Park’s random straight-dude act all the more amusing because he can vacillate between goofiness (like when Marcus raps about a tennis ball) and earnestness at the drop of a dime. Meanwhile, Wong’s Sasha revels in cutting sarcasm and quick wit.

That’s the beauty of Sasha and Marcus’ relationship: They bring out the best in each other. Sasha helps Marcus realize his talent as a musician who can stand on his own feet, and Marcus reminds Sasha of who she was and still is. The conflict — because a rom-com always has one — comes from whether their relationship will hamper Sasha’s professional journey. It’s the age-old conundrum that asks whether a woman can have it all, while it assumes a man definitely can.

Does Sasha’s success make Marcus insecure? Should Sasha feel bad for leaving behind her humble past for fancy clothes and a fat paycheck? Does having done so mean that she turns her nose up at guys like Marcus, who spends his nights in his childhood bedroom smoking a bong? These well-tread questions all come up between them, which adds genuine texture to their relationship.

Unlike in “Mahogany,” however, Sasha stands by the choices she’s made and only asks Marcus to rise to his own potential. “Always Be My Maybe” highlights that being in a loving relationship is not about surrendering part of yourself to make your partner feel good; it’s about elevating each other. Neither Sasha nor Marcus is perfect, but they make each other better. That’s the mark of a great romantic comedy that is devoid of fantasy, even when the reality is difficult.

From the glossiness of the art direction from Cheryl Marion (“The Predator”) to the magnetic chemistry of the cast (which also includes the always reliable Michelle Buteau as Sasha’s assistant) and the mouth-watering cuisine, “Always Be My Maybe” is a delightful, funny, and wonderfully layered romp that’s smart enough to break traditional rom-com rules.