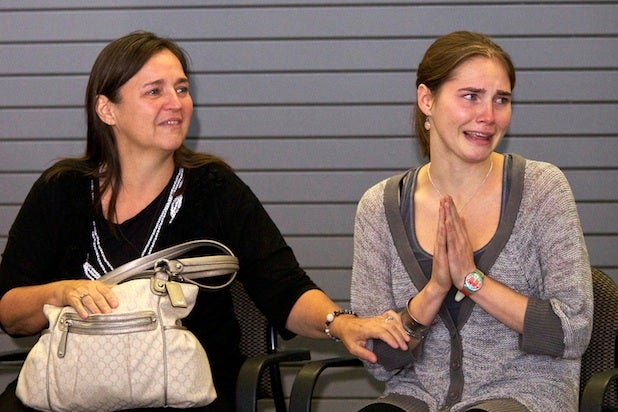 An Italian court has again found Amanda Knox guilty of murder — but the former student whose case created an international furor has vowed not to return to Italy, and is sure to appeal.

“Legally I’ll be defined a ‘fugitive,’ but I will continue to fight for my innocence,” she said in a statement to NBC’s “Today” earlier this month, before the conviction. “I will not willingly submit myself to injustice.”

A panel of two judges and six jurors sentenced Knox to 28 years in prison in the death of her roommate, British student Meredith Kercher. The judges and jurors also found her Italian ex-boyfriend, Raffaele Sollecito, guilty, and said he should be sentenced to 25 years, according to NBC.

Knox and Sollecito were first convicted and sentenced to 26 years in the 2007 killing. But in 2011, an appeals court acquitted Knox and Sollecito, finding that police had tainted key DNA evidence.

The 26-year-old Knox’s case has fascinated news media on both sides of the Atlantic because of Knox’s youth, telegenic looks, and nightmarish locked-up-abroad scenario come to life. Dubbed “Foxy Knoxy” in the tabloid press, she was played by Hayden Panettiere in a Lifetime movie about the case.

In April, Knox published a memoir about the case. It describes her story as a “labyrinthine nightmare of crime and punishment, innocence and vindication.”