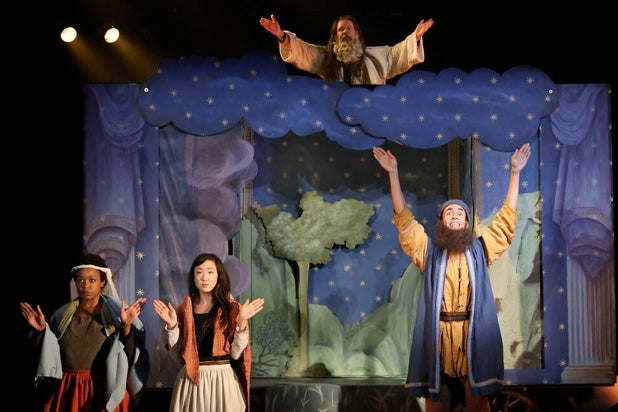 Long before #MeToo and Ronan Farrow tarnished him, and back in the days when New York’s cultural elite could not lavish enough praise on his movies, Woody Allen did deliver one onscreen moment that remains truly audacious to this day. In “Annie Hall,” his Alvy Singer character is waiting in line at the movies when he overhears a man pontificate about and grossly misinterpret “The Medium Is the Message.” Wanting to verbally trash the blowhard to his face, Singer instead walks off camera to bring Marshall McLuhan into the frame to do the job for him. Regardless of how many times you’ve see it, the moment never fails to delight in breaking the conventions of the screen, as well as fulfilling an all-too-common wish: to deliver irrefutable proof of someone else’s nonsense.

Playwright Jordan Harrison (“Marjorie Prime”) does something similar in his audacious new comedy, “The Amateurs,” which opened Tuesday at Off Broadway’s Vineyard Theatre. Where the “Annie Hall” moment lasts a couple of minutes, Harrison manages to deliver two rules-shattering scenes that constitute a major chunk of his 90-minute play.

These back-to-back scenes take place about a third of the way through “The Amateurs.” Up to then, we’ve been following a troupe of really dreadful actors as they travel through plague-torn medieval Europe to perform a really dreadful morality play based on the Old Testament tale of Noah and the ark. A clearly modern irreverence salts Harrison’s language, but for a good 30 minutes it’s difficult to figure out exactly where the hell “The Amateurs” is headed.

That’s when Harrison radically shifts gears to break the fourth wall and send a few other conventions of the theater off into the wings. The above paragraph about medieval plagues and morality plays may be enough to ward off most theatergoers from wanting to see “The Amateurs.” If not, it’s best to skip the rest of this review and buy your ticket now. Otherwise, you have been warned. Here goes:

A third of the way through “The Amateurs,” Harrison makes an appearance on stage in the form of the actor Michael Cyril Creighton, who has been playing one of the dimmer characters in the medieval acting troupe. As Harrison, though, Creighton explains a lot of what’s been going on in the play’s first half hour but not too much, because playwrights always think that “explaining” their plays “diminishes” the work, he says. Creighton is delightfully accessible in a way that the performance of the morality play has not been.

His very long digression is interrupted by an actress from the troupe, Quincy Tyler Bernstine, who believes she has a personal story to tell that might enhance and expand on Harrison’s. As storytellers go, Bernstine turns out to be as captivating as Creighton, and her tale of reinterpreting a classic play that she performed in a few years ago — she turned her minor character into the pivotal player — is a real doozy.

These two extended digressions that step us out of the play, of course, go right to the heart of it. Harrison, having done his research, has uncovered an audacious moment from the morality play about Noah and blown it up to pinpoint the birth of individuality as it intersects with the awareness that God might not exist. Along the way we’re also treated to amusing revelations about the bubonic plague, the Inquisition and AIDS, among other things.

Oliver Butler’s direction makes the most of Creighton and Bernstine’s big moments. It’s downright exhilarating to watch them set aside the play they’ve been performing. Perhaps Butler could have made the opening scenes of “The Amateurs” a little less obscure, but the payoff is enormous.

Among the players, Greg Keller exudes real intelligence as the acting company’s closet Jew, and troupe leader Thomas Jay Ryan is especially grandiose in the awfulness of his acting and his direction of that play within the play.