“The Amazing Race” has been on since September 5, 2001. A cornerstone of the founding generation of modern primetime reality, the CBS franchise has won 15 Emmys and ruled the Reality Competition category for seven years in a row.

After 16 years in non-stop pre-production, global production, or post, fans began to worry. First, there was no slot on the 2016-17 schedule. Then an 11-month hiatus. A rescheduled season premiere arrived just before April in a wonky Thursday 10 p.m. timeslot. “Double episode” weeks plowed through the season quickly. 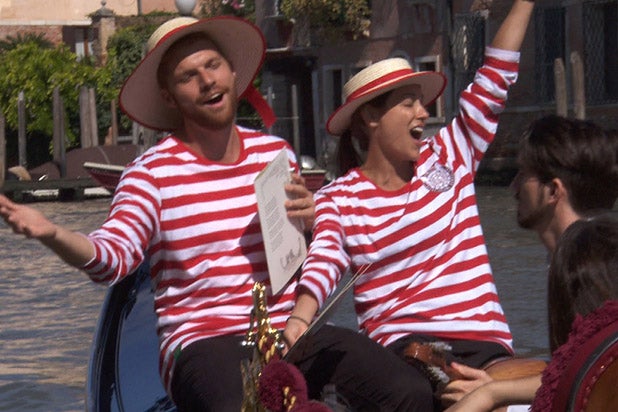 This season of “The Amazing Race” has included legs in Venice, Italy (above), Sao Paulo, Norway, Tanzania, and Hanoi amongst other destinations. (CBS)

All route markers were pointing to the U.S. version crossing its own finish line with the June 1 season finale, despite a standout season with a new format (two-person teams of strangers), time period improvement, and strong DVR returns.

In a surprise Saturday night announcement (May 13), CBS renewed the show for Season 30.

“Bertram is already in the office with a map on the wall,” Doganieri said. “He’s starting to point at countries.” 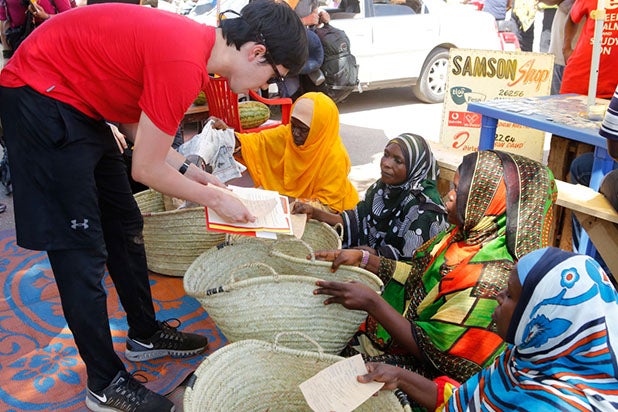 Season 29 contestants faced an exotic shopping challenge at a market in Tanzania. (CBS)

In TheWrap’s exclusive interview, the duo reveal how the Season 30 pickup came about and whether they had already prepared a series sendoff, talk about the possibility of Season 30 being an “All Star” strangers season, and discuss their own race to add another Emmy to their hefty trophy case.

When you shot Season 29 last summer, already knowing that the show did not have a slot on the 2016-17 schedule, did you shoot a series finale package as a safety to have something to send off the series?  If so, did you have to recut anything in the upcoming season finale?

Elise Doganieri: No. We never thought it was the end. (Laughing)

Bertram van Munster: Not at all. We never looked at it that way. Never. I doubt even if the show ended that it wouldn’t be picked up 5 years from now. It is truly an evergreen. It would be a difficult show to sell now because so much is manipulated (now) but ours is not manipulated, it’s not touched, it’s the real thing. 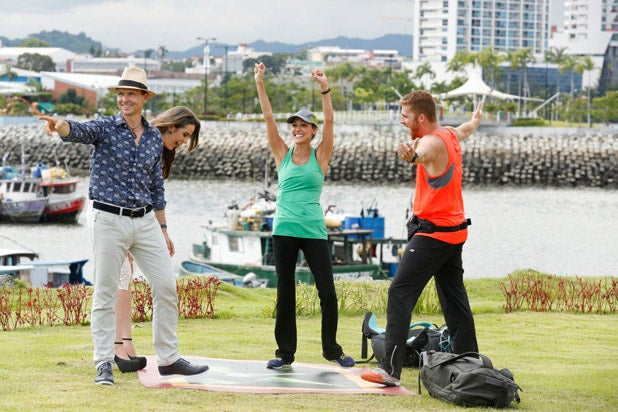 Host Phil Keoghan checks in contestants Brooke and Scott in Panama City at the end of the first leg of the current season. (CBS)

You’ve outlasted two version of “American Idol” and, except for “Survivor,” all of the other reality shows of the founding generation that first debuted at the same time as the “Race”.

Also Read: Meet 22 New 'Amazing Race' Contestants: Who Would You Pick as Your Partner? (Photos)

For Season 30, it would seem like a really good idea to do repeat this “strangers schoolyard pick”  format for making teams, but with All Star alumni from the series. Is that something you’re open to: “All Star First Impressions”?

BvM: We’re not going to tell you that. (Both laughing). This is all going to be discussed within the next week with the network. We have a rough idea. But we just need to discuss with the network how we can do it.

ED: We’re open to a lot of things. It’s really what is the best for the show. Everything’s open right now.

Will you entertain some hypothetical All Star stranger teams? What would it be like to have a team of (hysterical and teary) Rachel Reilly and (hysterical) Brooke Camhi (from this season) ….or Hayley (from the Blind Date season).

BvM: We’re not going to give you any help here.

ED: Are you saying that we should mix up the teams up with cast members we have had in the past?

TheWrap: Yes, two person teams of strangers from previous contestants. There could be a celebrity team of Tyler Oakley and New Kid on the Block Jonathan Knight. Though a bit on the nose, we could see super athletes with disabilities Redmond Ramos and Bethany Hamilton team up.

ED: Bertram and I, when we start saying things like “That would be great.” Everyone (else) says “Why not me? Why not me?” So Bertram’s right. We’re going to leave it a surprise. We’re ready for Season 30. Put your seat belt on. It’s going to be a wild ride. 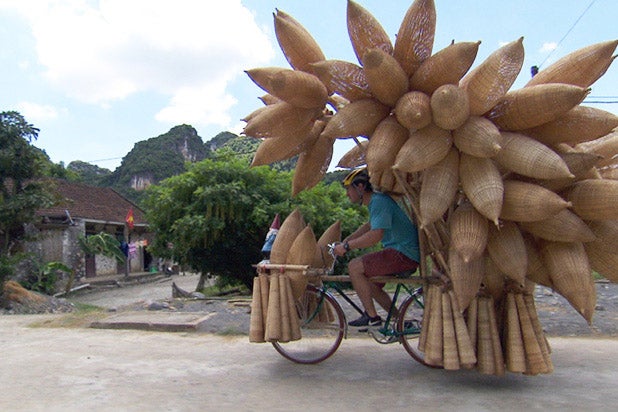 A crushing task in the Vietnam heat sent one team out of the race. (CBS)

What’s the time table for pre-production and when do you think you might shoot?

BvM: Here’s what we’re going to do. We’re going to have a meeting (this) week with the network and then we will lay out the official time table. That’s as much as I can give you right now. I think we’ll be starting up pretty soon.

ED: I will tell you Bertram is already in the office with a map on the wall. He’s starting to point at countries. I said ‘OK, let’s get going.’ He is ready to go. 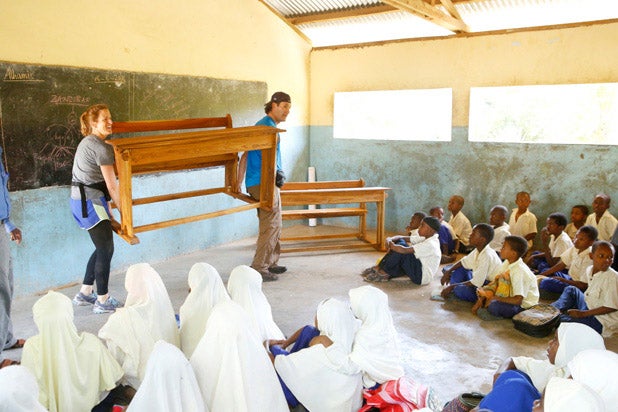 We’re in the heart of Emmy nomination season. What do you want to say to Emmy voters?

ED: I would like the Emmy voters to know that after all these seasons, that we are still putting 110% effort in to the production value, casting, locations, challenges and the entire show for CBS. I just would like everyone to know that we would love to have that Emmy back. It’s time, isn’t it?

(Ed. Note: “The Voice” has won this category for the last two years.)

ED: Thank you to all of our fans and the people that are voting. Please know that our show is not an easy show to produce and it might look easy when you watch in on TV, but it is a behemoth, a behemoth to produce.

BvM: I think it’s a testament to the quality of people and environment that we operate in that we got a pickup for 30. Elise said it all. We are glad that we can raise the bar in the reality television genre with a show like this.

ED: Think about all the locations we go to and all the people around the world that cooperate and work with us because there is such a love of the show globally. A lot of these locations  you can’t just get in to. It’s been an extraordinary experience and we are welcomed by countries, welcomed by tourism boards, welcomed by embassies, and we just have an incredible (reach that is) a global community. We want to do this show forever and ever, we just love making it. 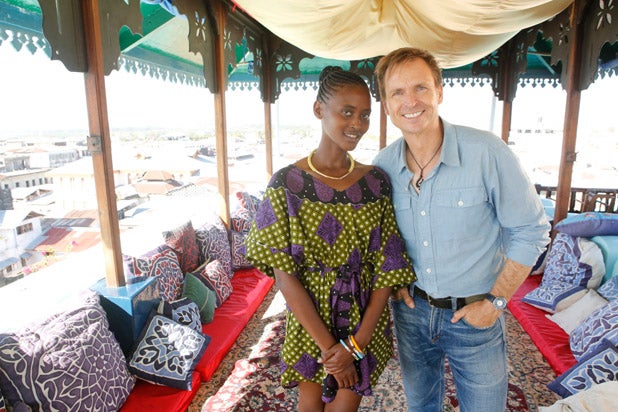 Since you guys wrapped shooting last summer and post-production likely in the fall, is there any Betram and Elise non-“Amazing Race” development we should be looking out for?

ED: Yes, yes, yes, …but I don’t know how much we can say because we are in development on three, possibly four shows right now. We’ve been very busy. We haven’t just been sitting back saying “What are we going to do next?”.  We’ve been very busy.  An announcement will probably come soon, but not just yet.

ED: So when people see those people running around with backpacks and the Amazing Race fanny packs, those are the formats running around the world right now.