“Rings of Power” will debut Friday, Sept. 2, on Prime Video, with new episodes rolling out weekly after the initial launch. The first season was filmed in New Zealand, the site of Peter Jackson’s acclaimed film trilogy based on J. R. R. Tolkien’s fantasy epics. Amazon is moving the second season filming to the U.K. 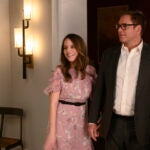 Per Amazon’s official description of the show: “The new epic drama brings to screens for the very first time J.R.R. Tolkien’s fabled Second Age of Middle-earth’s history. Beginning in a time of relative peace, thousands of years before the events of J.R.R. Tolkien’s ‘The Hobbit’ and ‘The Lord of the Rings’ books, the series follows an ensemble cast of characters, both familiar and new, as they confront the long-feared re-emergence of evil to Middle-earth.”

The first season was among the most expensive shows Amazon has produced. The retail giant spent around $465 million to film in New Zealand. The production was also the subject of complaints about an “unsafe” work environment for stunt workers, which Amazon denied.

Watch a short teaser for the series, revealing the title, above.