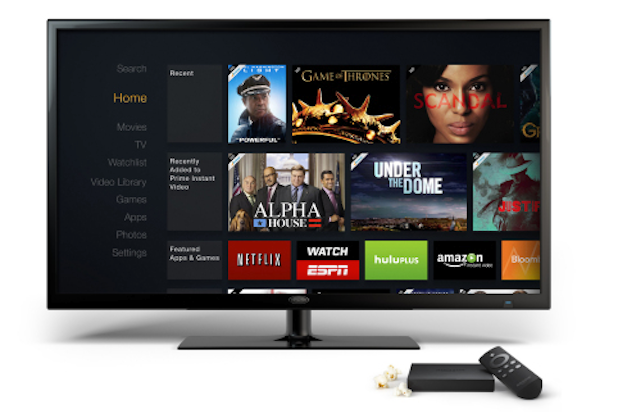 Amazon has unveiled FireTV, a new device that people can use to watch Netflix, Hulu, YouTube and other streaming video apps from the comfort of their living room. The device, rumored for the past several months, will compete against existing products like Google’s Chromecast, Apple TV and Roku.

Amazon revealed FireTV at a private event in New York, where it gave a demo and trumpeted the product’s various features. It is similar to other set-top boxes in its technical aspects, though Amazon said it hoped its voice search and faster processor would obviate complaints about other devices, such as poor search and lags.

The box, which costs $99, is very slim — thinner than a dime, Amazon says. It can either mount behind your TV or stand on its own, and it comes with a remote control that is Bluetooth-based.

FireTV boasts a wide array of streaming video partners, including Netflix, Hulu Plus, ESPN, Major League Baseball, YouTube, Showtime and Red Bull. The biggest omission is HBO Go, which is on the Roku.

“Tiny box, huge specs, tons of content, incredible price–people are going to love Fire TV,” Amazon founder and CEO Jeff Bezos said. “Voice search that actually works means no more typing on an alphabet grid. Our exclusive new ASAP feature predicts the shows you’ll want to watch and gets them ready to stream instantly. And our open approach gives you not just Amazon Instant Video and Prime Instant Video, but also Netflix, Hulu Plus, and more. On Fire TV you can watch Alpha House and House of Cards.”

As more people opt to cancel their cable subscriptions, a phenomenon known as cord-cutting, large technology companies have pursued their eyeballs and their wallets with new set-top boxes. Apple and Roku were the first successful entrants into this market, a match-up that pit one of the world’s most valuable companies against an independent upstart.

Microsoft plays in this ecosystem as well with the Xbox, a video game console that has more more users any of the set-top boxes. Both Google and Amazon, who now produce their own content as well, have entered the field in the past year. The Kindle Fire and Fire TV are synced, so any purchase you make on one is accesible from the other.

Amazon’s new set-top box will also offer music and gaming, with apps for Pandora, iHeartRadio, Sega an Ubisoft. They do not view this as a competitor to consoles such as the PlayStation or Xbox, but as an alternative for people who do not own consoles.

The Apple TV served a second purpose for Apple, as a new way to sell movies, music and TV through its iTunes Store. For Amazon, like Apple, the FireTV is another store. Retail is Amazon’s main business, and the principal reason for its foray into another competitive market — tablets.

FireTV and the Kindle Fire are synced so any movie or game you buy on one will be accessible on the other.