Amber Heard made a surprise appearance Thursday on the witness stand – the final testimony of the weeks-long trial – saying she suffers minute-by-minute harassment and daily trauma requiring special “rules” in her life to prevent triggering anxiety attacks.

Heard was called by her own legal team for a final plea to the jury. After enduring a grueling cross-examination, the judge dismissed most of the courtroom for the day, concluding testimony in the defamation trial. Closing arguments were to begin first thing Friday.

Heard was asked by her attorney about what it’s been like going through the ordeal – a question Depp’s lawyers had asked the “Pirates” actor during his surprise appearance just the day before. With Heard’s return, both parties have now taken the stand for a second and final time.

“I am harassed, threatened, humiliated … every single day,” Heard said, fighting through tears. “People want to kill me and they tell me so. Every day. People want to put my baby in the microwave. They tell me that. Johnny threatened – promised me – that if I ever left him, I’d make him think of him every singe day that I lived.” 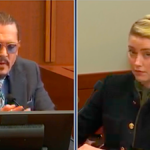 Also Read:
Johnny Depp Returns to Witness Stand for Final Statement: ‘I Did Tell the Truth’

Heard then described how the people in her life have been “forced” to accommodate her because of what she’s been through.

“Every single day I have to relive the trauma,” she said. “My hands shake, I wake up screaming. My friends have to live with a set of unspoken rules about how to not touch me, not to surprise me. My partners have rules about how they can deal with me, how they can touch me … I have rules with doctors that I see, gynecologists I see … people I’m training with to do a combat scene for ‘Aquaman,’ a trigger happens, I have a meltdown and have to deal with that and the crew has to deal with that.”

Heard also blamed Depp for the army of online trolls who have come out of the woodwork to scorn her.

“Johnny has enlisted thousands of people to torture me every day,” she said. “I’m not sitting in this courtroom snickering. This is horrible and this is painful and this is humiliating for any human being.” 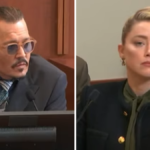 After a break, Heard was cross-examined by now-viral Depp lawyer Camille Vasquez, who started off with a barn-burner of a question: “Ms. Heard, your lies have been exposed to the world, is that correct?”

Heard denied having said anything untrue during her time on the stand – then Vasquez began riffling through various details of her past testimony that didn’t jibe with that of other witnesses. Vasquez dug hard into the images of bruises captured by TMZ when Heard was filing a restraining order, suggesting she tipped off TMZ for a photo opp – a common practice at the celebrity news site.

“I did not call TMZ or any paparazzi,” Heard said. “Absolutely not. What actual survivor of domestic violence wants that?”

Things got increasingly heated between Heard and Vasquez when Depp’s attorney threw a flurry of evidence photos in front of Heard and began grilling her about her past testimony about dates and times.

“I’m supposed to remember a [picture of a] wine bottle on the floor, after all I’ve been through?” Heard snapped. “I don’t think so, that’s now how that works,” she said, before the judge called a timeout and admonished the court after someone snickered from the gallery.

Vasquez also suggested Heard was not expecting Kate Moss, nor a TMZ employee, to show up to testify on Depp’s behalf, dispelling an old rumor that he’d pushed her down a flight of stairs. Both took the stand Wednesday, undermining some of Heard’s versions of events.

“I know how many people will come out in support of him,” Heard said. “That’s his power. He is a very powerful man, and people love currying favor with powerful men.”

Depp is suing Heard for $50 million, claiming he lost income because her Washington Post op-ed identifying herself as a victim of abuse defamed him. She is counter-suing for $100 million.

Depending on how long closing arguments take, the jury could get the civil case as early as Friday.