Amber Heard repeatedly broke down into sustained sobs Thursday while testifying in ex-husband Johnny Depp’s defamation trial, choking up while describing how the extremely intoxicated “Pirates” star sexually assaulted her with a glass bottle, pushed her throat against a table so hard that it collapsed, and screamed in a rage that he was going to kill her.

And that was just one night in Australia. Heard described several incidents from the tempestuous marriage during a grueling second day in the witness box, including the infamous “Boston Plane Incident,” a 2014 cross-country flight during which Heard said Depp taunted, accused and assaulted her in a drunken, jealous rage while his friends and employees silently looked on. 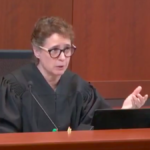 But by afternoon, Heard’s lawyers had directed her recollection of the infamous night she says he assaulted her with a liquor bottle in Australia, where Depp was filming “Pirates 5.” It was early in the marriage, Heard said, and Depp had taken eight to 10 pills of MDMA and other drugs over a few days, sending him into a sustained, violent rage.

Heard said Depp threw her across the room and onto a ping-pong table, where he climbed on top of her and “was whacking me in the face.” She said they argued about Depp’s drinking, then struggled over a bottle she managed to snatch from him and smash on the floor. Heard said Depp picked up the broken bottle and held it to her neck. “He told me he’d carve out my face,” she said.

Heard said the assault continued with Depp throwing bottles of liquor and slamming her into the counter and walls. Heard said her nightgown was ripped off and as Depp climbed on her naked body, she looked in his eyes, “And I don’t see him anymore, it wasn’t him. It was black. I’ve never been so scared in my life.” 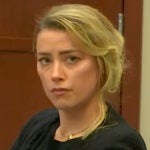 Also Read:
Amber Heard Says Johnny Depp Tormented Her on Plane While Friends Watched: ‘Nobody Did Anything’

Heard could barely get words out when describing the attack. “Johnny had the bottle inside of me and was shoving it inside of me over and over again,” adding that she was scared to move, because “I didn’t know if the bottle he had inside me was broken.”

Heard said she hadn’t seen the bottle – at the time she thought Depp might have been “punching” her in the groin – until this week, when she the photo was entered into evidence.

“I didn’t have a memory of seeing the bottle that Johnny used on me,” she said, while looking at the image on-screen, and getting progressively upset as she spoke. “This picture I wasn’t aware of until just the other day, or the day before. I felt my stomach tying up when I saw it … I remember a pressure, square, something firm butting up against my pubic bone. … When I realized it was an object or a bottle, not his fist … And I hadn’t seen this bottle. And this came out in (evidence) … and so I recognize it.”

Heard told the court Depp begged her not to leave and she took sleeping pills to fall asleep. The next day, she saw messages written in blood on the walls, blood on the floor, broken glass – broken windows and overturned tables. She then saw Depp and realized “he was missing a finger.” Heard’s attorney showed the court a multitude of pictures displaying damage to the house caused by the fight and its fallout, with Heard commenting that it appeared the areas had already been cleaned up by the time they were taken. 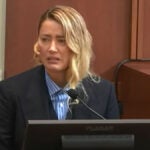 She recalled another fight, this one in December 2015, during which Depp unexpectedly head-butted her. She said he had chased her in the kitchen, grabbing her by the hair, slammed her head and dragged her into a room where they started a “shoving match that I was losing.”

Heard said she was toppled over a chair and hit the back of her head on a brick wall before Depp taunted her to get back up. When she did, she says Depp “leaned back – and head-butted me right in the nose,” she said. “Instantly, searing pain. … You had your hands free, why did you head-butt me?’

Heard said by the time it was over, her “head was bleeding from the ripped out hair … chunks of hair on the floor.” The court was shown pictures of damage in the couple’s penthouse and pictures of Heard with a black eye and bruised lip.

Heard described how her career suffered because of Depp’s jealousy. She told the court Depp reluctantly agreed to let her film “Magic Mike 2” because she wasn’t playing a sexualized character. “I wore no makeup or minimal makeup in the movie, no sexy clothing.”

In December 2014, Heard was approached about doing a movie for sci-fi/horror writer Clive Barker who she’d dreamed of working with. Heard was set to meet Barker at his house and said Depp was furious and accused her of wanting to sleep with Barker even though he was “terminally ill” with toxic shock syndrome. Heard said Depp was so angry he hit her, broke things and “split.”

Several emails between Depp and Heard was shown to the jury. In the messages, Depp apologized for upsetting Heard, “I couldn’t be more sorry for, yet again, ruining your day,” he wrote. In the long message Depp also wrote, “As stupid as it sounds…?? I hope your meeting with Clive Barker is excellent.” In another Depp wrote, “It’s away…I’ve let it go… Went too far,” adding he would out in extra time with his therapist.

Heard said after violent episodes Depp would often use words like “savage, monster, devil” which he mentioned in his messages. By December 2014, Heard said she was trying to stand up for herself by “pushing back, I’d push him off of me. I’d hit his hands away. I tried to always get back up,” which made things worse. She also told the court, “I would yell at him, I’d scream at him, I’d call him ugly names.”

Court was dismissed until May 16th when Depp’s lawyers will begin Heard’s cross examination.