A big stock drop added to an already-rough month for AMC Entertainment on Wednesday, with the nation’s largest cinema chain now trading for less than half of what its shares went for just weeks ago.

The company’s massive run this year has come as it has been embraced as one of the darlings of Wall Street Bets, a popular Reddit forum where users trade stock advice. And while many WSB users were defiant on Wednesday, saying AMC was still going to “moon,” or dart higher, others took a more somber tone; several users jumped on WSB to share screenshots of their accounts taking four-and-five-figure hits because of AMC’s drop. 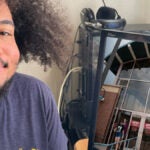 “This is one of the dumbest things I’ve ever seen,” one user said in response to another user showing they’d lost $9,300 on AMC on Wednesday. “I love it. I’ve lost a fair bit this week and seeing this kind of stupidity makes me feel slightly better.”

Meanwhile, on Twitter, AMC true believers got the hashtag #AMCNOTLEAVING to trend on Wednesday, with users posting the digital rallying cry alongside claims they weren’t selling their shares (and some were even doubling down and buying more). AMC is expected to share its Q2 financial report in early August.