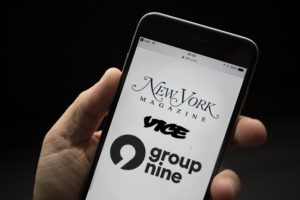 AMC Theatres is becoming the first movie theater chain in America to enter the home entertainment business, launching a video-on-demand service that will be available to members of its AMC Stubs customer loyalty program.

AMC has made deals with every major Hollywood studios — including Disney, Universal, Warner Bros., Sony, Paramount and Lionsgate — to create a catalog of over 2,000 films that will be available for Stubs members to buy or rent at launch. To mark the start of the service, titled AMC Theatres On Demand, AMC is offering Stubs members who buy or rent a Lionsgate or Paramount film as their first movie the chance to select three more films from that studio for free. Users will be able to access the service on AMC’s website and mobile app.

In a statement, CEO Adam Aron called the streaming service “perfect sense” for AMC, as its connection to AMC Stubs will both encourage customers to go to the movies more to make use of the loyalty program and allow the company to personalize the VOD service with greater detail.

“With more than 20 million AMC Stubs households, and with our web site and smartphone apps already being visited hundreds of millions of times annually by movie fans, AMC Theatres is in a unique position to promote specific movies with greater personalization than has ever been possible before,” Aron said. “Through the launch of AMC Theatres On Demand, we can reach movie lovers directly and make it easy for them to access films digitally.”

AMC is also starting a cross-platform marketing partnership with AMC Networks to promote the service. As part of the deal, films from AMC Networks’ IFC Films and RJLE Films catalogues, while AMC Theatres On Demand will promote AMC Networks’ targeted streaming services like Shudder, Sundance Now, and Acorn TV.

“This is a great opportunity for us to both make our film titles available to movie customers and also increase awareness of our growing streaming services, which are all focused on specific genres and content categories fans are passionate about,” said Ed Carroll, chief operating officer of AMC Networks.

“If you are a fan of horror, or British drama, that interest translates to the television screen, the movie theatre, the phone or anywhere anyone can consume content today. We look forward to working with AMC Theatres to make their new in-home movie service even more appealing to fans through access to our film libraries and also raise awareness of our hyper-focused streaming services among their millions of customers.”

AMC Theatres has spent aggressively to bring moviegoers back to theaters over the past few years, with alcohol sales, an expanded menu, and recliner seats among the amenities introduced by the chain. In addition, the company announced the A-List ticket subscription service last summer, in part in response to the now-defunct MoviePass service. A-List offers up to three movie tickets per week for $19.95-$23.95/month depending on state. The service is expected to reach 1 million users well ahead of AMC’s June 2020 goal.