During its latest quarterly earnings call, AMC Theatres announced that it is in various stages of talks to pick up leases on 10 high-profile locations in Los Angeles, Chicago and Atlanta, including eight multiplexes once operated by Arclight Cinemas and Pacific Theatres

AMC CEO Adam Aron said the company has signed letter of intents on six of the locations being looked at, with three in Los Angeles, two in Chicago and one in Atlanta. Two of the Los Angeles locations are the former Pacific Theatres locations at the Grove in West Los Angeles and the Americana in Glendale, which will reopen later this month. Advance talks have begun on four other locations. 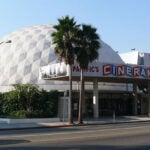 Also Read:
ArcLight Hollywood Lost Supremacy Even Before the Pandemic Shut It Down for Good

Aron did not disclose whether the third Los Angeles location being discussed is the Cinerama Dome complex in Hollywood, which faces a more complicated process for acquisitions as Arclight has land ownership of the Dome but not of the adjacent multiplex.

AMC is also planning on opening an additional dozen new theaters worldwide that were in the process of being built prior to the COVID-19 pandemic. The expansion of the chain comes after AMC raised $1.25 billion in new equity capital last quarter along with a stock surge boosted by meme traders, leading Aron to announce on Twitter that it would pick up new cinemas while eliminating some of its underperforming locations.

In its quarterly report, AMC reported $444.7 million in Q2 revenue and a net loss of $344 million, both beating Wall Street expectations. Stock for the company closed at $33.89/share on Monday, still hovering around the levels last seen in 2017. Aron predicted that the company would start reporting a net profit again in Q4 of 2021, assuming that annual domestic box office totals finish at $5.2 billion.