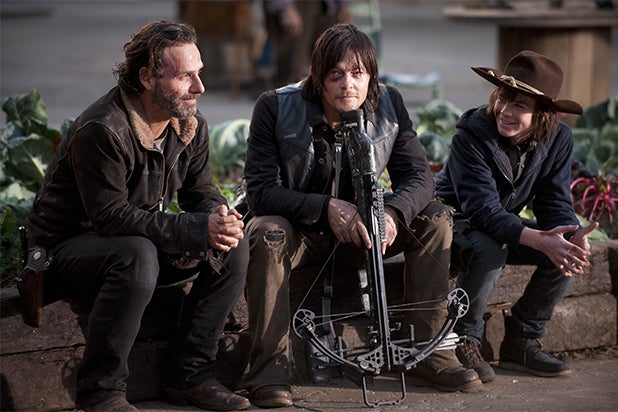 AMC’s “The Walking Dead” has dragged its ragged band of survivors through hell these past few years, but executive producer Gale Anne Hurd assured us the worst is yet to come.

“If you think you’ve seen the characters pushed as far as they can go, just know that this season we’ve found a few new levels,” Hurd told TheWrap.

Cable television’s highest rated show returns Sunday for Season 5, which is great news for the 14 million fans who tune in each week, but a bittersweet occasion for the characters who populate the zombie-infested world and keep getting run through the wringer. The Season 4 finale, for example, saw a significant portion of the group arrive at a supposed save haven (Terminus) just to get captured by possible cannibals.

But, Hurd insists there’s a light at the end of the tunnel, and it might not even be an oncoming train.

The executive wouldn’t spill any secrets about AMC’s highly anticipated zombie spin-off series, in the works now for more than a year, but she did tell us five things we needed to know about Season 5 of “The Walking Dead.” Amazingly, not all of it was doom and gloom…

1. Rick finally found himself after losing almost everything.
Protagonist Rick Grimes (Andrew Lincoln) has wavered between feckless farmer and ruthless warrior for what feels like a few seasons now, but he regained both his composure and his can-do attitude in one of Season 4’s final scenes.

“There was a big reunion in the [Terminus] train car, which was bittersweet. But we did end with Rick throwing down the gauntlet and saying they were screwing with the wrong people,” Hurd said. “And he sounded like he meant it.”

2. Growing ensemble results in less screen time for each character, but actors are putting the show’s needs first.
“Obviously we have a large cast,” Hurd explained. “We try to make sure we have enough time to service all the character stories.”

But fans of fringe characters like Beth Greene (Emily Kinney) and Abraham Ford (Michael Cudlitz) needn’t worry about their favorites getting squeezed out because none of the top-billed actors on “The Walking Dead” insist on hogging the spotlight.

“We have the nicest group of actors who are 100 percent committed to the team. They’re all so generous,” Hurd continued. “And it starts with [Lincoln], who is one of the most generous actors I’ve ever had the pleasure of working with.”

3. No cameos policy means survivors won’t have to square off against zombie .
Hurd, who produced and co-wrote “The Terminator” with in 1984, is currently preparing for an upcoming 30th anniversary appearance alongside Cameron and star Arnold Schwarzenegger on Wednesday. But, she specifically ruled out the possibility of having either one of them guest star as a walker on “The Walking Dead.”

Phew. Our ragtag group of survivors are overmatched enough already.

4. Despite a revolving door of showrunners, “The Walking Dead” remains a big, happy family behind the scenes.
From (Oct. 2010 to July 2011) to Glen Mazzara (July 2011 to Jan. 2013), the show has played host to more big time breakups than a Taylor Swift album. But since Scott M. Gimple took over near the end of Season 4, it has apparently been smooth sailing.

“The outside perception is quite different from what actually goes on,” Hurd said. “It’s a rather problem-free show because we have one big family, which is actually far more functional than most genetic families.”

“We have love among the ruins with Maggie (Lauren Cohan) and Glen (Stephen Yeun), and there might be a few more romantic sparks ignited [with other characters] as well,” Hurd said. “In this challenging environment there is still a sense of hope. Hope for a cure. Hope for restarting society and civilization, and doing a better job than was done in the past.”

Here’s hoping none of our favorite characters get eaten alive on Sunday’s premiere.