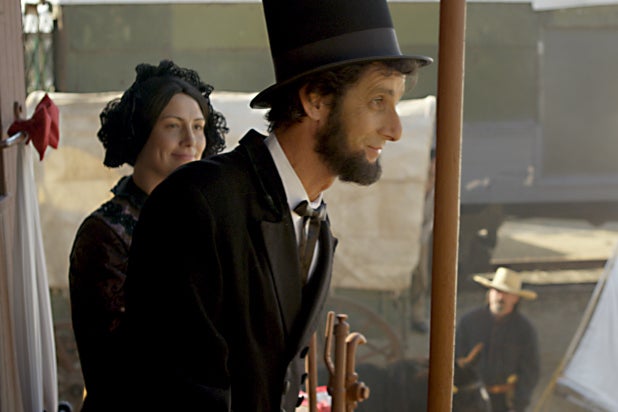 Author, filmmaker, and convicted felon Dinesh D’Souza returns to movies with “America,” based on his best-seller of the same title, a follow-up to the screechy, slapdash “2016: Obama’s America.” “America” is D’Sousa and co-director John Sullivan‘s love letter to America — or rather, to their version of America, where superior conservative ideas and narratives about America’s divinely-provided greatness are constantly under attack from what he calls a liberal “narrative of shame” about this country.

It also features historical re-enactments — Washington among the troops, Lincoln on the stump, a young Hillary Rodham meeting Saul Alinsky in what appears to be a smoke-filled high-school cafeteria — whose production values are somewhere between the Hallmark Channel and a “Saturday Night Live” sketch.

It would be one thing if D’Souza had an idea, or any idea, he could stick to as a through-line in his project. But ‘America” isn’t a documentary; it’s more like the badly-filmed version of a badly-written, meandering op-ed piece from a paper that lacks fact-checking or proofreading. Or worse, it’s the film version of a dunderheaded hashtag-activism campaign, perhaps #NotAllCapitalists or #YesAllConservatives, all slogans and no thinking. It’s a series of, at best, anecdotes, and the plural of “anecdote,” as it’s been noted, is not “data.”

Discussing slavery, for example, D’Souza’s film explains that, you know, there were also black slave-owners and gasp, white slaves. The fact that these phenomena were real doesn’t make them anything close to a statistically or morally significant part of what we know as slavery in America, nor do they negate a serious discussion of, say, how the attitudes, laws, and injustices that grew from the poisoned soil of slavery, Jim Crow, and restrictive housing laws still affect African-Americans.

And then D’Souza has the gall — or the ignorance — to suggest that the North’s successful prosecution of the Civil War negates a need to worry or feel regret over slavery in American history because, “For the first time in history, a war was fought to end slavery.” This is, of course, a grotesque lie (see Lincoln’s letter to Horace Greeley of August 22, 1862) and just one of the multiple failings of fact and argument in “America.”

Worse, “America” is technically inept: The editing is clumsy: points and lines of dialogue are repeated ad nauseam; clips from C-SPAN have large-font video timecode burned into them, as if D’Souza were too rushed or too lazy to find a clip that looked even halfway decent; interview participants are either identified only verbally or not at all. The sound mix is incomprehensibly sloppy. Graphics look slapdash; historical recreations are either cheap-looking, unintentionally funny, or both.

Finally, and most awkwardly, D’Souza’s film is also a fairly clumsy attempt to restore his own tarnished image. As the film posits that the NSA is too powerful and could become a political tool of any administration, D’Souza incorporates his own story of being indicted on charges of campaign finance violations and tries to suggest it as the targeted actions of the Obama administration against a filmmaker, author, and political opponent. But D’Souza was found guilty of those charges and is preparing to serve 10 to 16 months in prison.

Really, considering what’s legal in American campaign financing, the fact he was actually, successfully charged with felony violations of those laws suggests either egregious lawbreaking, utter incompetence, or some mix of both. (Also, let’s be honest: If the Obama administration was targeting conservative money-raisers based on their effectiveness, the Koch brothers and a long list of other similarly stealthy big-money Republican backers would be much bigger priorities than the look-at-me gadfly D’Souza. )

“America” is also hilariously over-wrought,  like when it paints the late Saul Alinsky as the liberal version of Orson Welles’ Harry Lime in “The Third Man,” even now controlling American liberalism from the shadows and the grave. The film is intellectually and factually spurious, in addition to being, as noted, deeply self-serving.

In the end, “America” is just badly made. Michael Moore, D’Souza’s nemesis, may be self-important at his worst, but he actually knows how to cut a sequence, get a shot, and tell a story backed by data, all of which are beyond D’Souza and Sullivan. “America” would be simply annoying if it were merely preaching to a conservative-leaning choir of low-information voters and ax-to-grind Obama-haters; what makes it unendurable is the fact that D’Souza and Sullivan can’t craft a sermon that would keep even the choir awake, interested, and entertained.