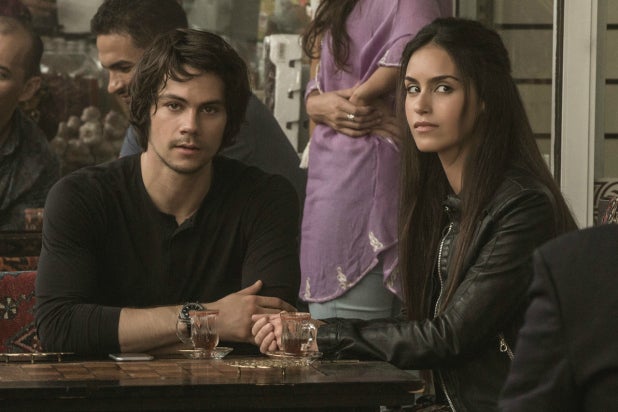 “American Assassin” aims to be a political thriller with a contemporary mindset, but it feels like it was made for audiences from the 1990s that didn’t get enough Tom Clancy movies.

Dylan O’Brien, tackling not only his first proper “adult” role but also his first project since suffering a debilitating accident on the set of the third “Maze Runner” film, plays the protagonist of Vince Flynn’s bestselling book series with intensity and verve. But the meta-narrative of his rehabilitation provides a more compelling journey than the movie is interested in exploring with its lead character.

Nevertheless a suitably exciting action film that probably takes itself a little too seriously, “American Assassin” works best when it’s trying to replicate the rhythms of a pulpy page-turner and least when pausing to consider the deeper implications of politics and personal responsibility in a post-9/11 world.

O’Brien plays Mitch Rapp, a young man consumed by rage after the murder of his fiancée during a mass shooting in Ibiza where the pair was vacationing. After preparing himself for months to take revenge on the people he blames for her death, CIA Deputy Director Irene Kennedy (Sanaa Lathan) intervenes and apprehends him, thinking he would make a strong candidate for a black-ops program run by cantankerous Cold War veteran Stan Hurley (Michael Keaton).

Reluctantly, Hurley begins the process of integrating Rapp into his team and acclimating the young man to the responsibilities of working for a secret government organization. But when a mission leads the team to a mysterious arms dealer nicknamed “Ghost” (Taylor Kitsch), Rapp becomes a pawn in an evolving game between Hurley and their quarry after the recruit discovers that his new adversary was once a trainee in the same role he now inhabits.

For those without strong feelings for the Harrison Ford-era Clancy adaptations, which were polished but largely unmemorable, “American Assassin” works best as a little-league version of one of those or, in more contemporary terms, as an unsurprising origin story for what the filmmakers obviously hope is the beginning of a franchise.

Even frazzled and furious, O’Brien oozes charisma as Rapp, and he keeps us from thinking too deeply about the ongoing (and perhaps intensifying) emotional toll of his fiancee’s death, not to mention the more subtle shades of grey that lurk between the film’s inevitable need for good and bad guys. Particularly in the wake of the “Maze Runner” series, which he’s carried handily, O’Brien could easily pop in and out of these films for years while exploring bigger and better opportunities elsewhere.

But much like the Clancy adaptations that undoubtedly condensed much of the nuance in their source material, “American Assassin” pays too little attention to the moral implications of what may seem to some like an understandable choice — taking personal revenge on the perpetrators of a heinous crime — which leads to joining a cycle of violence and recrimination that inescapably results in more innocent deaths.

The script, by Stephen Schiff, Michael Finch, Edward Zwick and Marshall Herskovitz, maintains a narcissistic focus on the choices these individuals make without much regard for the world around them (at least until there’s a bomb that threatens a whole lot of people), and then tips the scales to justify their behavior even when it obviously led themselves and others to dangerous new paths.

Keaton’s Hurley, for example, is effectively responsible for training Ghost and setting him on the path towards vengeful megalomania, but their eventual face-off barely scratches the surface of the betrayal Ghost experienced, and mostly serves to underscore what a bad ass Hurley is. But even as Rapp carries an all-consuming determination to stop “bad guys,” up to and including hunting them down and killing them, he fails to develop the self-awareness to consider that his motivations and his actions aren’t that different from those of his enemies.

As Rapp’s mentor, Keaton sinks his teeth into Hurley’s no-nonsense, at-any-cost training methods, and almost makes us believe he really doesn’t care about the foot soldiers he’s sending off to stop America’s enemies. It’s a role unlike anything we’ve seen from the actor, and he injects humor and ice-cold indifference in compelling measures that distinguish Hurley from similar characters played by his contemporaries.

Conversely, Lathan is thankfully graduating into more sophisticated and authoritative roles, here playing Hurley’s commanding officer, a mildly more compassionate but no less focused operative who sees potential in Rapp; interestingly, her attitude towards him may be even crueler than Hurley’s. Meanwhile, Kitsch gives Ghost the skill and hurt feelings of being ousted as Hurley’s protégé, but neither the instability nor frightening ruthlessness to be a proper villain for the film’s needs.

Director Michael Cuesta’s previous work includes the pilot for “Homeland,” the 2014 CIA-themed crime thriller “Kill the Messenger,” and the 2001 independent film “L.I.E.,” about the relationship that develops between a grieving 15-year-old boy and a pedophile. As skillfully as he chronicles Rapp’s introduction to this world of black ops and the shifting motivations and alliances of its players, “American Assassin” could use more of the subtlety (and ambiguity) of that earlier film and less of the routine polish of his more recent work.

If nothing else, perhaps the film would have benefited from embracing its beach-read appeal and playing up the “American” aspect of its celebration of military heroism; “Assassin” wouldn’t have necessarily been a better film because of it, but that feels like an easier (or, let’s say, more commercial) route to get to explore this hero’s journey in future installments with, one would hope, some of the complexity that’s absent here.