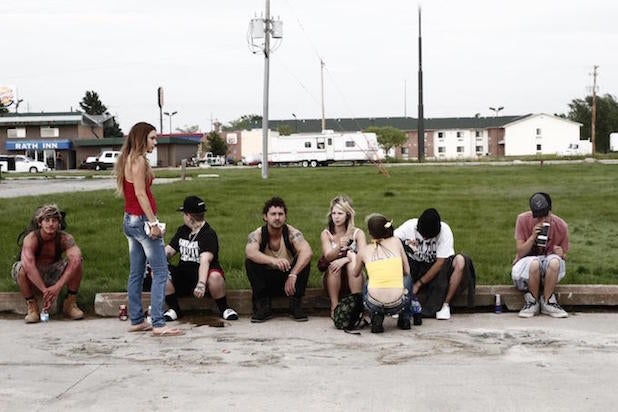 “American Honey” was greeted by clipped, polite applause at its first Cannes screening (plus a few scattered boos). The audience was in measured in its enthusiasm but rather quick to let up and head out the door.

A longer, more rousing ovation would most certainly have been the order of the day but for the film’s punishing length of two hours and 42 minutes. After nearly three hours, all were eager to get out.

There’s a great movie buried somewhere in “American Honey” — heck, there might be two of them. But at its current length, it resembles nothing so much as fine spirit overly diluted with water. The care and quality is all there, but in this iteration they ain’t coming through.

The film is directed by Andrea Arnold, a British director of considerable talent and acclaim. With her first film set in the U.S., Arnold sets her sights on, well, America. “American Honey” — its title from a song by popular country rockers Lady Antebellum — is about the open road, pop music and the vast swath of land that cuts through the country from Texas up to North Dakota.

It takes the form of a picaresque, which is a fancy way of saying it follow a group of lower-class youths with a rambling, naturalist eye. There’s no real plot, per se, but for the tensions a girl goes through after joining a band of itinerant youths, selling magazine subscriptions.

The girl, Star, is played by Sasha Lane, and the film rests in tight, hand-held close-ups on her for its full duration.

Star is lured into the group by Jake (a well-cast Shia LaBeouf), although the girl doesn’t need much prodding. In that most American ritual, she seeks to escape a dead-end situation by hitting the open road.

The rest of the (loooooooooooong) film follows Star and her group of wayward friends, all runaways from an economy that’s left them behind, and Star and Jake as the circle each other with passion and jealousy.

If somewhat skimpy in narrative, Arnold more than makes up for it in visual riches. Her roving, caramel-hued compositions are wonders to behold. Keeping the camera close at all times, the film is as much a topography of the human face as it is the American West and Midwest.

Arnold makes excellent use of music here, staging singalong sequences of group bonding set to hip-hop, pop and country, of course (see the title song). They work in a wordless, emotive quite similar to the famous “Tiny Dancer” sequence from “Almost Famous.”

But “Almost Famous” had one such scene; “American Honey” has five of them.

That, in a nutshell, speaks to the film’s issue. The repetition of visual motifs, of plot point and whole scenes, robs them of individual power. Once is sublime, twice too much. By five, you sort of turn into Star, starring at this expansive and indulgent film, longing to be free.