(This is a SPOILER-FREE discussion of “American Horror Stories”)

There’s a pattern we’ve seen play out with “American Horror Story” during each of the past several seasons: A compelling start, followed by a steady decline into incoherence. The process has been speeding up — “AHS: 1984,” the most recent season, was off the rails by the midway point.

This is the double-edged sword of the Ryan Murphy brand. The shows under his umbrella are loud, boisterous, audacious, hilarious, intense — and generally just not like other shows. While that uniqueness and that tonally erratic signature is the reason we watch this stuff, it also makes it easier for things to get out of control because it’s really tough to balance all those moods.

“American Horror Stories,” which is streaming only through FX on Hulu, provides what feels like the perfect solution to that problem, by keeping its stories bite-sized. Yes, the two stories we’ve gotten so far have each followed the “AHS” pattern — the compelling initial premise that leads to an off-the-rails conclusion — but they don’t wear out their welcome. 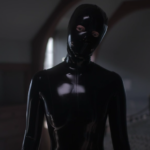 The problem we’re having with regular seasons of “AHS” is, well, that we have way too much time to think about them. Weeks of breaking down each new episode and pondering what we just saw. Just normal fandom stuff. But “AHS” hasn’t held up to that routine amount of scrutiny lately.

It’s frustrating for me personally because I’m all about the ridiculous vibe of this show. There’s nothing else like it. But it’s been increasingly difficult over the years to feel much enthusiasm because I know it’s going to fall apart. I know I’ll have fun with it for a little while, and then get very annoyed with it the longer each season goes on.

So “American Horror Stories” has been a huge relief for me. I get that “AHS” weirdness that only this show can deliver, but the story wraps up before I can get annoyed by it. The two-part premiere episode, “Rubber (Wo)man,” managed to give us the full-season “AHS” experience in 90 minutes. Yes, it absolutely went off the rails in the second part, but the short length meant it was a fun kind of off the rails. And now that story is done. 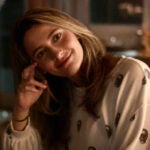 But this week’s story, “Drive In” — directed by Eduardo Sanchez and written by Manny Coto — really hit the sweet spot. A complete “AHS” story about a movie that makes viewers lose their minds and try to murder everyone within reach in just 39 minutes with everything you want. Bloody violence, sex, a weird meta monologue about movies and a fun little twist ending. You get the amusing self-indulgence without the fat.

It’s been a little bit scary to me to remember that once the “American Horror Stories” season ends next month it’ll be time for “American Horror Story: Double Feature” to begin just a week later — while a halt in production due to a positive COVID-19 test could could conceivably push it back a little bit, it’s not likely. I just hope the main series can stand up to this new standard that its spinoff is setting for this franchise. Because if it’s another disappointment it might feel worse this time because of how great the opening act is shaping up to be.