In the 1-minute, 14-second video, which you can view above, you’ll meet Rubber Woman. Yes, Rubber Woman, a clear reference to the infamous Rubber Man from the first season of “AHS,” a.k.a. “Murder House.” How do we know that’s Rubber Woman and not Rubber Man? Well, the teaser is aptly titled “Rubber Woman,” giving you plenty to theorize about until “American Horror Stories” debuts next month.

Per FX on Hulu’s official description for the show, “American Horror Stories” is a weekly anthology series that will feature a different horror story each episode. Further details are being kept under wraps, but executive producer Murphy recently revealed the first set of cast members, including “Glee” alum Kevin McHale and “Pose” star Dyllon Burnside, on Instagram.

The series, which will premiere July 15 on FX on Hulu with two back-to-back episodes, is executive produced by Murphy, Brad Falchuk, Alexis Martin Woodall, John J. Gray and Manny Coto. 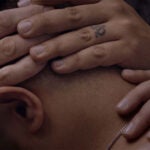