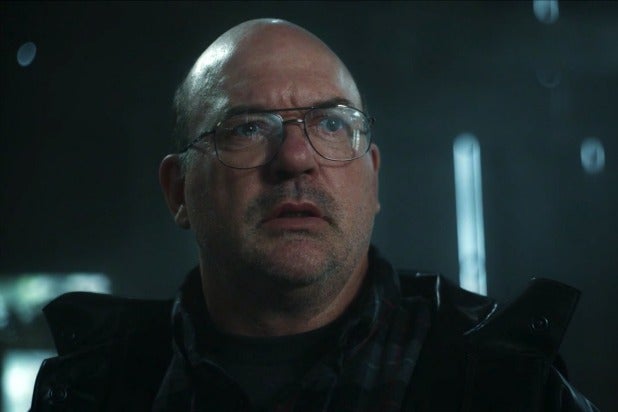 (This post contains spoilers for “American Horror Story: 1984” through the episode that aired Nov. 6. You have been warned.)

The penultimate episode of “American Horror Story: 1984” aired Wednesday, setting up what we can only assume is going to be a bonkers finale to a season which had such a seemingly straightforward premise that we had no idea it would get this crazy by Episode 8.

Tonight’s installment was all about introducing more questions than ever before, as we prepare for the end of this ’80s-slasher story. And because there have already been so many twists, we can’t help but wonder: how will Ryan Murphy and Brad Falchuk and their camp bring “AHS: 1984” to a close without a bunch of loose ends.

See below for TheWrap’s list of the biggest questions we have and check back next week to find out which ones have — and haven’t — been answered by the finale.

What the heck was the last scene in Episode 8 about?

So the episode ended with Mr. Jingles (John Carroll Lynch) getting stabbed and dumped in a row boat and left drifting in the lake. And then he got attacked by a water person in a blatant nod to the original “Friday the 13th” movie. And then he woke up in a world in which his dead mom (Lily Rabe) and dead brother are just hanging out by the lake being happy, and they invite him to stay. And then the episode ends?

Since the show sorta vaguely established that Jingles killing his mom back in the day started off this curse that turned all the people who have died at the camp to stick around forever as ghosts, we can’t help but think that Jingles is gonna learn something in this place — This parallel universe? Weird vision? — that will help him break the curse. But this bit is so random and out of left field we can’t begin to guess about any of the particulars

In Episode 7, we learned that there was yet another massacre at the camp, way back in 1948. Mr. Jingles’ mom worked as the cook, and one of her sons died in a swimming accident that year, causing her to go on a murderous rampage until Jingles, as a child, killed her. Since all the ghosts at the camp died after that whole thing, the implication seems to be that Mama Jingles’  murder spree is what set off whatever this supernatural stuff is that’s been happening on the previous six episodes.

But that explanation is merely implied, and since this twist and that previous massacre had never really even been hinted at before last week, we still don’t really know what to think about this. So did this Lady in White somehow cause all of this madness?

How does Bruce the hitchhiker connect to all this?

It’s wild that “AHS: 1984” would continue to introduce major characters we’ve never heard about before now, but Mama Jingles wasn’t the only one to come in late into the season: we also met a serial killer named Bruce (Dylan McDermott) in Episode 7. He tried to kill Brooke (Emma Roberts) and Rita (Angelica Ross), but they turned the tables on him, tied him to a post, cut off his thumbs and left him to rot.

But since we’re talking about a character being played by a returning “AHS” actor, we had a hunch Bruce would be back this week, and he was. And now he’s teamed up with the Night Stalker (Zach Villa) to wreck some more havoc. We think he’ll play an important role in the finale, seeing as he had to have been introduced so late in the game for a reason, right?

What exactly is Satan trying to accomplish with all this?

In Episode 4, The Night Stalker (Zach Villa) went toe to toe with Mr. Jingles (John Carroll Lynch) and lost, suffering a gruesome death via tree limb through the skull. But as the episode ended, his body hovered in the air as his wounds healed, and he stood up looking good as new.

At the start of Episode 5, whoever or whatever is inside that body told fake Rita (Angelica Ross) they want her to go kill, just like her father did. And then by the end, that same presence in the Night Stalker’s body resurrected Mr. Jingles. And then the two took off toward Los Angeles in a stolen police car.

And now we have the Night Stalker calling in debts on Satan’s behalf? But why? Is there a point to all this?

What’s the endgame for the ghosts?

In Episode 6, Ray astutely notes that none of them know why they’re still stuck at Camp Redwood long after their deaths. Presumably, Ryan Murphy and Brad Falchuk wrote that line in there because there’s significance to that question — like there’s some way for them to move on, or some purpose they need to fulfill. But what could it be? It doesn’t feel like “AHS: 1984” has given us any hints about that yet. Jingles’ mom told him last week that Satan can prevent people from coming back as ghosts, but we don’t know the significance of that revelation yet.

How many more secret relationships will be revealed before the season ends?

The fourth episode of “AHS: 1984” dropped a couple doozies right at the beginning, when it explained how Montana and the Night Stalker knew each other, and that Montana hated Brooke because the Best Man at Brooke’s wedding massacre was Montana’s brother and Montana blamed her for the whole situation. And then last week we found out about Mr. Jingles’ mom and his brother and their connection to the camp.

The whole season has been like that, with major new reveals every week. We can’t help but assume more of those types of revelations are in store in the finale — but how many more could there be?

Who’s going to actually survive this?

It’s the standard slasher movie question that has to be asked about an “AHS” season that’s a tribute to slasher movies. Actually, this has to be asked about every season of “American Horror Story,” but this one is a bit different because everybody keeps coming back as ghosts. Will whatever this curse is that’s plaguing Camp Redwood be broken? What will happen if it is? Will all these ghosts come back to life or will they be perma-dead after the curse ends?

We honestly don’t really have any idea what’s going on, even at this late stage, and so it feels like literally anything is possible at this point.