The two films each received 13 nominations, to 10 for “Gravity” and six each for “Captain Phillips,” “Her,” “Nebraska” and “The Wolf of Wall Street.”

The “Hustle” and “Slave” totals tied the record for nominations set by “Lincoln” last year.

With 10 best-picture nominees and six nominees in all four acting categories, as well as best director and a number of other categories, the nominations included most of the main Oscar competitors.

Best-picture nominees include “American Hustle,” “Captain Phillips,” “Gravity,” “Her,” “12 Years a Slave” and “The Wolf of Wall Street,” all of which also received nominations for their directing.

Because the CCMA has separate comedy, action-movie and sci-fi/horror categories, “12 Years a Slave,” “Captain Phillips,” “Her” and “Nebraska” were eligible in fewer categories than “Gravity,” which also received nominations in the action and sci-fi categories, and “American Hustle” and “The Wolf of Wall Street,” which landed comedy nods.

Sandra Bullock received three nominations for two performances, a comedy-actress nod for “The Heat” and best-actress and action-actress noms for “Gravity.” Jennifer Lawrence received an action-actress nomination for “The Hunger Games: Catching Fire” and a supporting-actress nom for “American Hustle,” while Christian Bale and James Gandolfini were nominated for “Hustle” and “Enough Said,” respectively, in both the acting and comedy-acting categories.

The top contenders or critically-lauded performers missing from the CCMA nominations include Oscar Isaac from “Inside Llewyn Davis,” Michael B. Jordan and Octavia Spencer from “Fruitvale Station,” Idris Elba from “Mandela: Long Walk to Freedom” and Jonah Hill from “The Wolf of Wall Street.”

For the third time in the last week — the first two being nominations for the Screen Actors Guild Awards and the Golden Globes — Tom Hanks was nominated for his lead role in “Captain Phillips,” but not for his supporting role in “Saving Mr. Banks.”

Adele Exarchopoulos from “Blue Is the Warmest Color” and Leonardo DiCaprio from “The Wolf of Wall Street” were both left out of the marquee best actress and best actor categories, though they were nominated for Best Young Actor/Actress and Best Actor in a Comedy, respectively.

Scarlett Johansson received a nomination for her voice-only supporting role in “Her.”

With a lineup of 29 categories swollen by the TV-friendly action, sci-fi and comedy categories, the CCMA can be an uncomfortable hybrid – a group of critics’ awards where “Fruitvale Station” was left out entirely but “Man of Steel” got a nomination, and where Palme d’Or winner “Blue Is the Warmest Color” received half as many nominations, two, as “Iron Man 3.”

The awards are chosen by the members of the BFCA, the largest film critics’ organization in the United States, with nearly 300 television, radio and online critics. (Full disclosure: I am a member.)

The BFCA has been giving out awards since 1995, and prides itself on being the most accurate predictor of Oscar success – though with 10 Best Picture nominees and with expanded fields in the acting and directing, it casts such a wide net that it would be hard-pressed to miss any of the key Oscar contenders.

Last year, eight of the nine Oscar Best Picture nominees were first nominated by the BFCA, with only “Amour” not being included. In the acting categories, 18 of the 20 Oscar nominees were also CCMA nominees, though Oscar winner Christoph Waltz was one of the missing two.

The 19th annual Critics’ Choice Movie Awards will take place on Jan. 16, about 10 hours after Oscar nominations are announced. For the second consecutive year, the show will take place at Barker Hangar in Santa Monica, CA and will be broadcast on the CW Network.

Aisha Tyler will host the show. 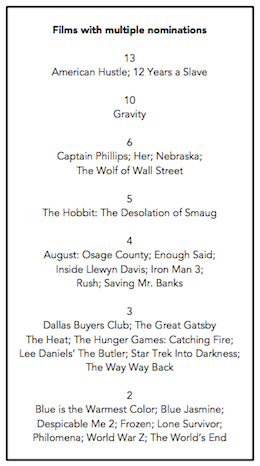