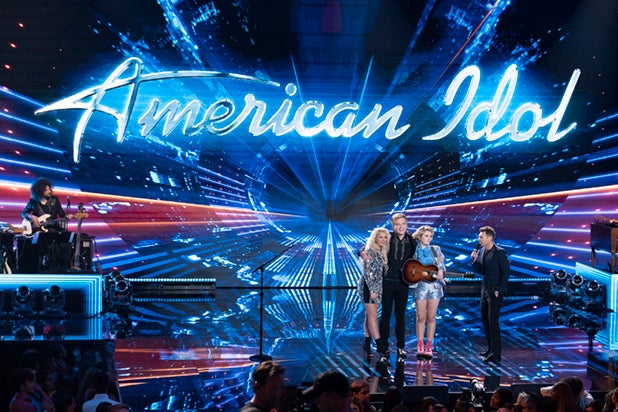 Maddie Poppe was crowned winner of the 16th season of “American Idol” on Monday night, becoming the first winner of the singing competition at its new home on ABC.

Heading into the finale, it was down to the top three contestants, Gabby Barrett, Caleb Lee Hutchinson and Poppe.

The 19-year-old from Iowa sang Fleetwood Mac’s “Landslide” for her last performance on Sunday night, which earned heavy praise from judge Katy Perry.

The episode padded out its two-hour run time with a number of musical performances, including by judges Perry, Lionel Richie and Luke Bryan — accompanied by a number of this season’s finalists — as well as guests Bebe Rexha, Darius Rucker, Gary Clark Jr., Nick Jonas, Patti LaBelle and Yolanda Adams.

On Sunday, the top three unveiled their “winners singles” on the “Idol” stage, performing for the first time the songs that would be re-released as their debut to a general audience: Barrett’s gospel-inspired “River Deep,” Poppe’s country-pop “Going Going Gone” and Hutchinson’s “Johnny Cash Heart,” only one of which will now receive an official re-release through Disney’s Hollywood Records.

Monday’s finale marked the conclusion of the first season of “American Idol” to air on ABC, which revived the singing competition less than three years after it was first canceled by Fox.

The show has since struggled to recapture some of the popularity it enjoyed at the peak of its original run, but ABC has already picked up another season of “Idol” with all three judges and host Ryan Seacrest signed on to return.

The top seven finalists — Cade Foehner, Catie Turner, Jurnee and Michael J. Woodard along with Hutchinson, Barrett and Poppe — will embark on a national tour beginning July 11. Season 8 champ Kris Allen and the winners of ABC’s “Boy Band” competition will also tag along.