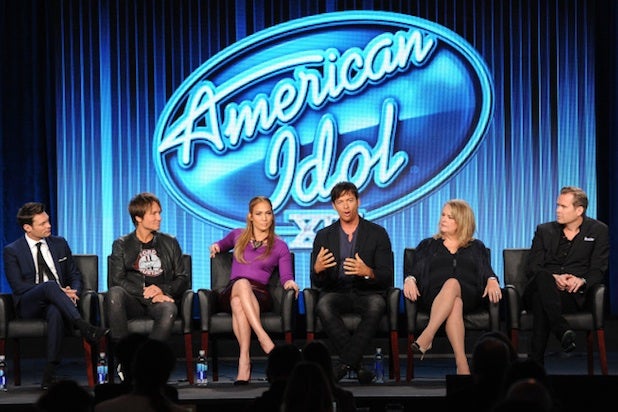 Fox’s “American Idol” team re-emphasized how well the judges get along and laid out a few changes for the long-running competition for Season 13.

“They’re fun, they get along, it’s going to be great,” Seacrest blurted out at the top of the session as if listing Fox’s talking points.

Aside from learning how much the new judges’ relationships differ from last year’s feuding Mariah Carey and Nicki Minaj (“We share the same heart,” said Urban), executive producer Trish Kinane addressed the “small changes” coming up.

“We studied the show from the talent search to the finale,” adding that the result is “really refreshing.”

At the top of the list of changes: former judge Randy Jackson’s new role as mentor. “I think we’re really happy to have these judges,” the producer said. “And there was something else for Randy.”

A new round has been added that will represent a two-day workshop between the contenders and Jackson. Other new rounds announced on Monday include, “Hollywood or Home” week in which contestants who believe their audition was good enough to get them to Hollywood will be considered one more time. Some will have to perform again, others will just be sent home.

Finally, there’s “Rush Week,” a three-night event in which the Top 15 men and women perform live for the first time for America’s vote, which will reduce the contestants down to the Top 13 finalists.

In addition, the show has added “The Chamber,” which captures the moments before contenders walk into their auditions. The show has also expanded the pre-cleared song list, and revamped theme weeks to be more reflective of how a song speaks to the performer.