Brent Renaud, a filmmaker and award-winning American video journalist, was shot and killed while reporting in Irpin, Ukraine, according to Anton Gerashchenko of Ukraine’s Interior Ministry. Renaud was 50.

In a statement, Gerashchenko said Renaud “paid with his life for attempting to expose the insidiousness, cruelty and ruthlessness of the aggressor.”

Renaud has worked for several media organizations, including The New York Times, NBC and HBO. Although he was wearing a Times press badge at the time of his death (shown in the photo above), the newspaper said he was not on assignment for them at the time and the badge had been issued for a previous assignment years earlier.

In fact, according to Renaud’s brother, Craig, Brent was on location in Ukraine shooting a multipart series about refugees around the world called “Tipping Point” for MSNBC and the television and film division of Time magazine.

Edward Felsenthal, the editor in chief of Time, and Ian Orefice, the president of Time and Time Studios, confirmed that in a statement: “Brent was in the region working on a Time Studios project focused on the global refugee crisis. Our hearts are with all of Brent’s loved ones. It is essential that journalists are able to safely cover this ongoing invasion and humanitarian crisis in Ukraine.”

Fellow American journalist Juan Arredondo told the horrific story from a hospital bed of being shot and his colleague killed by Russian forces while reporting in the Kyiv suburb. 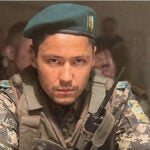 “We crossed one of the first bridges in Irpin, we were going to film other refugees leaving and we got into a car,” Juan said in a brief video posted on the Okhmatdyt hospital’s Instagram page. “Somebody offered to take us to the other bridge, and we crossed the checkpoint and they started shooting at us. Um, so the driver turned around and they kept shooting at us, the two of us – my friend is Brent Renaud. And he’s been shot and left behind. (doesn’t know how he is) I saw he was being shot in the neck. And we got split.”

The video is accompanied by photographs of Renaud in surgery to remove shrapnel in his thigh.

“Brave American journalists wanted to film the crimes of the Russian soldiers and paid the highest price for their professional duty – life and health,” the Ohmatdyt IG caption reads.

Renaud and his brother Craig won a Peabody award for a Vice News documentary called “Last Chance High” about a Chicago school that serves students with emotional disorders. Together, they’ve also covered the wars in Iraq and Afghanistan, as well as the earthquake in Haiti and the cartel violence in Mexico.