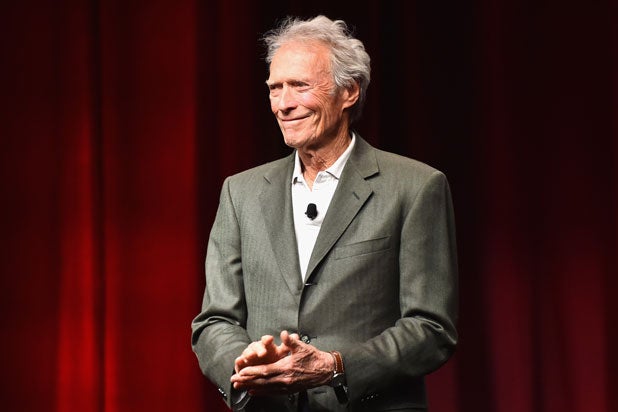 Clint Eastwood was the guest of honor at “The Legend of Cinema Luncheon” at the annual CinemaCon convention in Las Vegas on Wednesday.

Eastwood is coming off the smashing success of “American Sniper,” which was the highest-grossing film at the domestic box office in 2014, though the film made the bulk of its money this year.

Following a clip reel featuring everything from Westerns and war movies to action movies, dramas and “chick flicks,” Eastwood sat down to discuss his career and why he’s still working at the age of 84, showing no signs of slowing down.

“The reason I’m still making pictures is I enjoy it and I want everybody else to enjoy it. It’s a fun process and when it stops being fun, you won’t see me doing it anymore,” said the iconic filmmaker.

Eastwood said that he caught the Hollywood bug after watching Howard Hawks’ WWI film “Sergeant York” starring Gary Cooper, which was the first movie to make a mark on him back in 1941, when Eastwood was just 11 years old.

As a young actor, Eastwood was one of approximately 30 contract players at Universal, though the studio cut him loose after a year-and-a-half because he didn’t “click.” That led Eastwood to the TV series “Rawhide,” which he described as his “first steady job in the business.”

Eastwood’s natural curiosity as an actor led him to direct after years of watching people make decisions that dictated what the end result would be. Eastwood said he always enjoyed the process of acting, and movies in general, but wanted to try his hand behind the camera because he loves having absolute control.

“I like being involved with a story from beginning to end. You’re not just a singular element of a movie, you’re painting the picture and holding the brush,” said Eastwood, who added that the most challenging thing about being a director is answering “about 400 questions a day.”

As far as “American Sniper” goes, Eastwood said he was reading the book when Warner Bros.’ Dan Fellman called and asked if he knew anything about the project. Eastwood was under the impression that Steven Spielberg was directing the film, but Fellman told him Steven had moved on to something else and the studio would love to have him direct it.

Eastwood was immediately intrigued and eventually called Spielberg to say, “‘I’m taking your leftovers again.’ He was very supportive. We’ve worked together on many occasions and have known each other for many years,” the “Mystic River” director explained.

As Eastwood became more curious about Chris Kyle, his heroics and his family, he reached out to the sniper’s wife, Taya. “I met his widow in Texas and she was very informative. She told me about how the family felt about the whole thing. It was a little bit touchy because I was seeing the family in mourning, but I had a good feeling about them.”

The rest, as they say, is box office history.