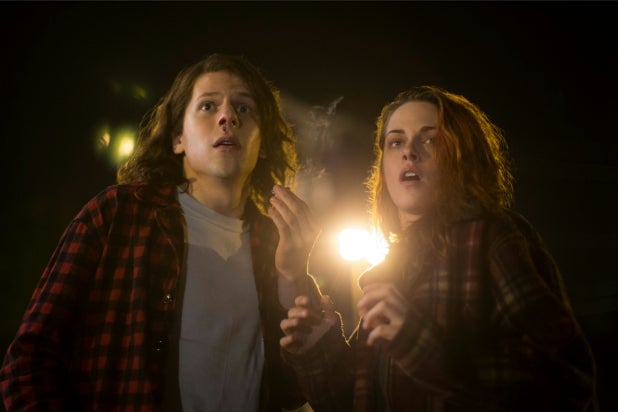 There are moments in “American Ultra” where you can see the smart, outrageous, hyper-violent farce that would attract the likes of not only stars Jesse Eisenberg and Kristen Stewart but also distinguished supporting players, including Connie Britton, Topher Grace, Tony Hale, Walton Goggins and John Leguizamo.

What these talented folks must not have seen coming, however, is how director Nima Nourizadeh (“Project X”) and screenwriter Max Landis (“Chronicle”) lose their way, allowing the film’s sensibility to degenerate from outrageous to cartoony, and piling up plot contrivances and corpses in stacks so high that they obscure whatever charms the film once might have held. “American Ultra” requires so many leaps in logic and tone that the audience winds up with charley horses.

Eisenberg stars as Mike, a West Virginia stoner with a humdrum job at an all-night grocery store. He’s a screw-up who wants only to do right by his devoted girlfriend Phoebe (Stewart), even though he torpedoes their trip to Hawaii (where he plans to propose) by getting violently ill at the airport. He’s conditioned to get sick anytime he tries to leave town, as it turns out, because he’s not just a stoner: He’s actually a CIA sleeper agent from an abandoned program run by Victoria (Britton).

She learns that pencil-pushing brown-noser Adrian (Grace) plans to kill off all the subjects of that program, so Victoria rushes to Mike’s store and says a random series of words that at first seem like gibberish. As it turns out, she has activated his killer abilities: when Adrian’s men come to town to dispatch Mike, he suddenly becomes a homicidal ninja, dispatching the assassins with nothing more than a cup of ramen and a spoon.

Thus begins an escalating chase, as Adrian quarantines the town — claiming Mike and Victoria are animal activists who have a deadly monkey fever — with more and more government agents pouring in, including Laugher (Goggins), one of several killers who are mental patients who have been turned into enhanced rogue operatives.

If you think Eisenberg makes an unlikely small-town slacker, he’s an even more unlikely CIA super-agent, but somehow the two miscastings cancel each other out and make him totally believable. He and Stewart have a sweet rapport, but her character has to endure more twists and revelations than her performance can bear. (And if you’re rolling your eyes at the idea of the “Twilight” star giving a performance, you haven’t been paying attention to her most recent work. Go stream “Clouds of Sils Maria” if you haven’t seen it already.)

The other actors do what they can with what they’ve got, but it’s a little dispiriting watching Leguizamo get saddled with this lazy caricature of a drug dealer — in his early one-man shows, this is the kind of role he used to joke about always being sent to audition for.

Nourizadeh and Landis are clearly going for a Tarantino level of blood-soaked dark humor, and while their cast is game, the film’s bursts of violence grow tiresome as its plot gets more and more ludicrous and hard to swallow. Cinematographer Michael Bonvillain (“Zombieland”) applies a nighttime sheen to otherwise forgettable locations (a big-box store, a military tent city, a ramshackle house), but whatever charm the movie possesses early on has worn out well before the final shootout.

If “American Ultra” is remembered at all in years to come, it will be as a classic example of a late-August burn-off: a high-concept movie with marketable names that nonetheless gets shoved into theaters late in the summer before reviews and bad word-of-mouth quietly send it off into oblivion.