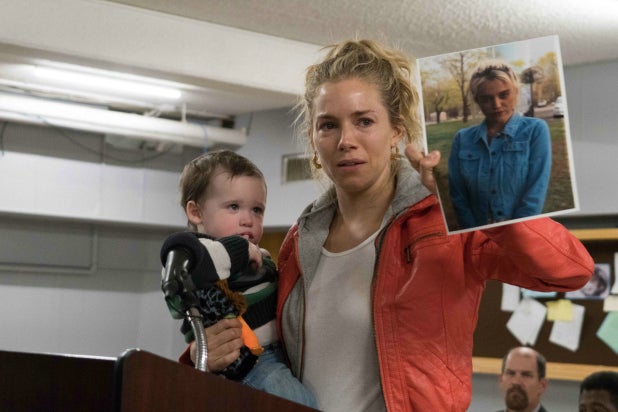 “American Woman” is what happens when you put a male director and screenwriter together to tell a story about their idea of a woman’s journey through traumatic events, time, and age. Director Jake Scott (“Welcome to the Rileys”) and writer Brad Ingelsby (“Run All Night”) manage to do a lot without ever touching the complex and emotional inner psyche of a working-class woman whose life is turned continuously upside down.

Debra (Sienna Miller) is a 33-year-old grandmother, becoming a single mom at the age of 16, with her own daughter Bridget (Sky Ferreira, “The Green Inferno”) following almost exactly the same path. Debra works as a cashier at a grocery store, lives across the street from her loving but disapproving older sister Katherine (Christina Hendricks), and babysits her grandson on nights she is not busy with the married man she’s dating.

Despite being a mother and grandmother, Debra is in many ways stunted in her growth, still living wild and unfiltered, constantly arguing with her widowed mother (Amy Madigan) but unconditionally loving and supporting her daughter and grandson to the best of her ability.

When Bridget goes missing one night, days and days pass with no news of her whereabouts. Wracked with rage and grief, Debra gets into a drunken car accident, which she survives. Years later, she is raising her grandson, Jesse, and living with an abusive boyfriend as a means to survive. Over the next several years, Debra is met with more traumatic events and challenges at an almost ridiculous pace, each pushing her to grow toward a future she rightfully deserves.

There’s an overwhelming feeling that Ingelsby and Scott only see working-class women as living a painful existence. Time and again, Debra faces grief, poverty, abuse, betrayal, loss and more, and yet, “American Woman” can find no depth in this story. After the first few traumas, every event just feels superficial — a surface scratch for the kind of audience that wants to see women’s lives as merely a character study, with no deeper understanding of their inner psyches.

Even what could be considered the worst thing to happen to a mother, the disappearance of a child, is offered merely as a rite of passage in character-building. The film acts as though external trauma itself builds character, rather than understanding that a woman’s internal growth — emotional, physical and mental — actually marks growth and change. The filmmakers instead jump repeatedly into the future, with a few costume or lighting changes to provide layers to Debra that should have been better defined by the script or direction.

Despite the script’s lack of character depth, Miller gives a consistently phenomenal performance. The film spans well over a decade, and Miller handles the weight of tragedy, grief, and strength over different eras of Debra’s life, reflecting her character’s personal growth even when the script leaves the audience guessing as to how she achieved it. Hendricks is also powerful, as she captures that disapproving, concerned-but-loving older sister feeling that only those of us who are older sisters, or have one, understand. The two actresses provide depth to a story that is often more concerned with a woman’s pain than with her perseverance (even when there is a literal “Perseverance” piece of wall art on display).

The production design really sells the blue-collar, working-class neighborhood. While we rarely see much outside of Debra and Katherine’s homes, the film’s focus on how easily both families can walk across the street (without worrying about a speeding car or caring if anyone overhears an argument) make the setting feel like a close community that’s also lonely and disconnected from a life that is waiting for Debra to catch up.

What “American Woman” does well is to showcase Miller’s exceptional talents and to highlight that she deserves more complex roles to further showcase those talents. But it also reinforces the fact that sometimes the best person to tell a woman’s story is another woman.