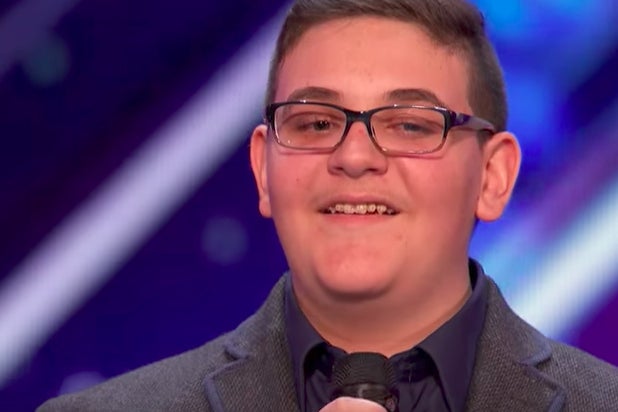 Christian Guardino earned the golden buzzer on last week’s “America’s Got Talent,” but his path to success on the show was not exactly smooth.

The 17-year-old singer, who was formerly blind, told TheWrap that he was all set to perform Stevie Wonder’s “Love’s in Need of Love Today” for the judges. But when producers heard him warming up with a few other songs just before filming began, they encouraged him to switch to “Who’s Lovin’ You” by the Jackson 5, which he had also prepared.

“Right before my audition, one of the producers came up to me and said, ‘Listen, we really, really love ‘Love’s in Need of Love Today,’ but we also heard you sing ‘Who’s Lovin’ You,’ and we thought it sounded so incredible, so we were just wondering if you wanted to do ‘Who’s Lovin’ You’ instead,'” Guardino said. “I thought about it for a little bit — I was like, ‘You know what? This happened for a reason.’ And we ended up doing that.”

When asked whether he was nervous about changing songs at the last second, the Patchogue, New York, native said, “I was horrified — I was so nervous.”

Luckily, the switch worked out for Guardino, who could tell right from the start of his performance of “Who’s Lovin’ You” that things were going well.

“During the first few seconds of the song, [judge] Howie [Mandel] stood up, and I was like, ‘Whoa, they really like me,'” the contestant said. “It was really exciting! I didn’t think I was going to get the reaction that I did.”

Also Read: Why 'America's Got Talent's' Ventriloquist Almost Threw Up Before Her Performance

Guradino, who was totally blind until undergoing gene-therapy treatment at age 12, said that music helped him keep his spirits up during a lot of tough moments.

“When I was going through this whole gene-therapy process, and even way, way, way before that, music was always there for me to get me through everything, especially with my eyesight,” he said.

“America’s Got Talent” airs on Tuesdays at 8 p.m. ET on NBC.