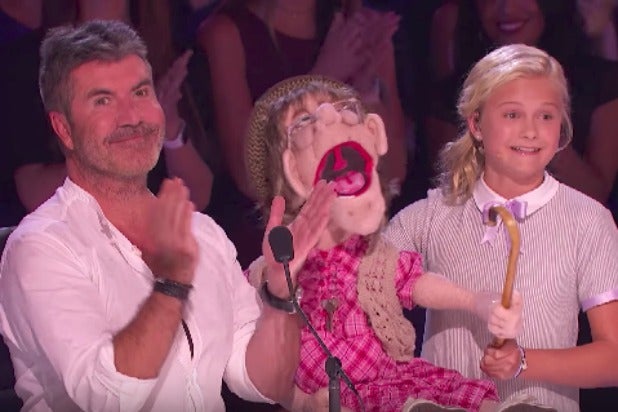 Simon Cowell and Darci Lynne Farmer on "America's Got Talent"

Things could hardly be going better for “America’s Got Talent” Season 12 breakout Darci Lynne Farmer, but that doesn’t keep the 12-year-old singing ventriloquist from getting nervous every time she gets on stage.

The NBC variety show contestant told TheWrap that last week’s performance, which included serenading judge Simon Cowell with her puppet Edna, brought the extra uncertainty of how Cowell would react to Edna’s crush on him.

“I [always] get super duper nervous, like I almost puke — I’m not even kidding,” Farmer said. “But this time, I was a little more nervous because of Edna singing to Simon, to not know what he might do or what she might say. But it went really well, and I’m really relieved that it went well.”

The Oklahoma native added that she doesn’t expect her nerves to subside anytime soon.

“I think I will get way more nervous this time because it’s the finals,” she said. “I have to do my absolute best — this has to be my best performance yet.”

Farmer added that she only watches each episode once “because I hate watching myself, but I like to see what I do and how it goes.”

Also Read: 'The Bachelor': Was Race a Factor in Arie Luyendyk Jr Getting the Gig?

Nonetheless, she is grateful for the “amazing” experience, which has helped teach her about “overcoming fear and just being yourself.”

“I think it would be jaw-dropping to be the winner,” Farmer said. “I think I have a good chance, but anything could happen.”

“America’s Got Talent” airs at a special time tonight at 9/8c on NBC.