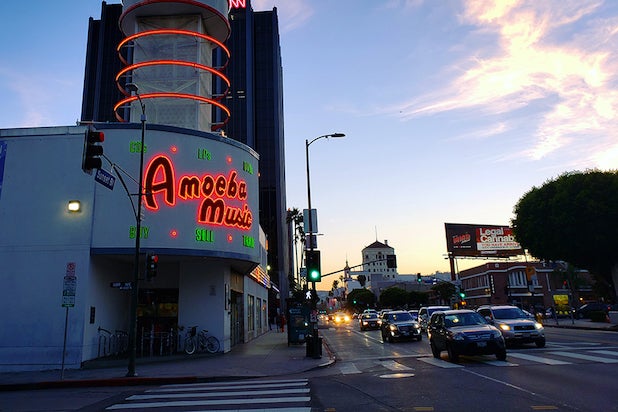 Iconic California record store chain Amoeba Music announced on Monday that the coronavirus pandemic has forced the early closure of its Hollywood location on Sunset Boulevard and that the company is now focused on reopening this fall at its new location on Hollywood Blvd.

“This is heartbreaking for us. We never envisioned not being able to give the store the send-off it deserves, to give you all a chance to say goodbye. We had so many events planned to celebrate our history at 6400 Sunset!” Amoeba wrote in a statement on its website. “But we are facing too many mitigating circumstances that simply won’t allow for it.”

Amoeba said it did not expect that its physical stores, in Berkeley, San Francisco and Hollywood, would be able to reopen by the time California Gov. Gavin Newsom allowed businesses to do so.

“Our store sees over a million customers each year, making us a higher-risk environment during this pandemic than most,” the company said. “In the improbable event that we were able to open at some point this summer, we would be asking a staff of 200+ to come into a very public-facing environment, where customer interactions are frequent (even with far fewer customers), and handling shared product in a shared space is the nature of the business. We don’t want to put the staff or our customers potentially at risk and sitting out the summer allows us to ensure everyone’s health and safety.”

Amoeba opened its location at 6400 Sunset Blvd. in 2001, where it has become a popular location for music lovers even as record stores like Tower Records closed down amid the growing popularity of digital music and streaming. But in 2015, the store’s building was sold to a developer that began plans to replace it with a 26-story complex. Amoeba announced plans to relocate to a new store in Hollywood, and earlier this year, it was announced that they would move to 6200 Hollywood Blvd. adjacent to the Fonda Theatre.

Also Read: Ratings: 'Millionaire' Slips Again as 'Masked Singer' Gets Back to Business - and Gets an Aftershow

By starting the move now, Amoeba says that it may be able to open at the new location ahead of schedule, provided that they get government approval to do so. Until then, Amoeba is still accepting online orders and has also started a GoFundMe page to help ease the financial burden during the closure of its physical locations. By Monday evening, the GoFundMe page raised over $216,000 in donations.

“We have to move in the fall and there are timelines and tasks involved in making that happen that were set into motion long before COVID-19,” Amoeba said. “If we don’t focus on getting the new store ready for the fall opening, the hard reality is we may never open again anywhere.”