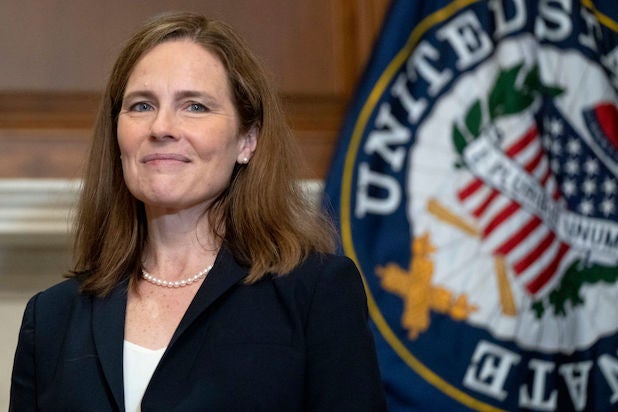 The Senate 52-48 voted in favor of confirming Amy Coney Barrett to the Supreme Court on Monday night.

Barrett is President Donald Trump’s third appointment — following Justices Brett Kavanaugh and Neil Gorsuch — to the highest court in the country. She was confirmed along party lines by the Republican-controlled Senate just a week ahead of the presidential election.

Justice Clarence Thomas is expected to swear in Barrett at the White House later on Monday.

Barrett’s confirmation comes after a month of contentious hearings, with Senate Democrats pushing back against the nomination of a new Supreme Court justice so close to the November election — and especially after reports that Justice Ruth Bader Ginsburg’s dying wish was that she not be replaced until after the election.

“The American people will never forget this blatant act of bad faith,” Senate Minority Leader Chuck Schumer said on the Senate floor on Monday prior to Barrett’s confirmation. “History will record that by brute political force … this Republican majority confirmed a lifetime appointment on the eve of an election.”

Meanwhile, there was also concern about holding the hearings during a pandemic. Sen. Sheldon Whitehouse, a Democrat from Rhode Island, blasted Barrett’s confirmation hearing earlier this month, calling the event an “irresponsible botch” and “slapdash” after Sen. Mike Lee, a Republican from Utah, addressed the Senate Judiciary Committee in person without wearing a mask. Lee tested positive for COVID-19 after attending the White House Rose Garden event announcing Barrett’s nomination.

And last week, Ashley Judd, Padma Lakshmi, Mira Sorvino and Michelle Hurd also released a joint statement, calling on senators to reject Barrett’s nomination because of her past rulings on issues related to sexual assault.

“Our society now demands we hold people who abuse their power accountable for sexual harassment and assault, no matter how important those people are. Yet multiple times, Judge Barrett ruled against survivors of rape, instead siding with powerful abusers and the powerful institutions that enable them,” Judd, Lakshmi, Sorvino and Hurd said. “We know painfully well that the systems for survivors to pursue justice are broken. They cannot be repaired and must be rebuilt. But Judge Barrett’s record shows she’d reshape the law to make it even harder for survivors to be heard and for justice to be achieved. This disqualifies her from serving on our nation’s highest court.”

Still, the Senate Judiciary Committee advanced Barrett’s nomination last Thursday, despite all 10 Democrats on the committee staging a boycott and refusing to vote. And on Sunday, after a failed filibuster effort from Senate Democrats to delay the confirmation, Senate Republicans were able to push ahead with a simple majority and propel Trump’s nominee to a Monday confirmation ahead of the November election.