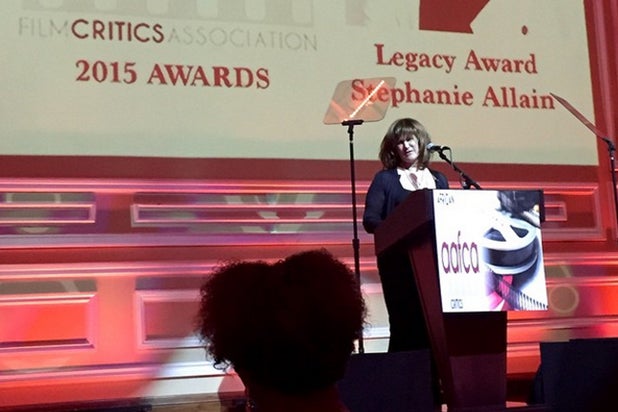 “She looked emotional,” said the first individual at the ceremony, held at Vine Street’s Taglyan Complex, told TheWrap. “She worked the room very quickly and spoke a mile a minute. It was a bit manic.”

As TheWrap previously reported,  Sony Pictures Entertainment announced on Thursday that Pascal is stepping down as co-chairman and chairman of the Motion Picture Group two months after a crippling computer hack brought the studio to a standstill and endangered the release of its movie, “The Interview.” She will segue into a launching a production venture at the studio in May, according to the statement.

Pascal was present at the AAFCA event Wednesday to support her friend and producer Stephanie Allain, who was being honored by with a Special Achievement Award. Pascal has been under intense pressure since the hack of the studio in November and the leak of her emails earlier in which  she and Scott Rudin joked about President Barack Obama’s taste in film being singularly Africa-American-themed. AAFCA President Gil Robertson IV has since come out in full force of Sony Pictures, and Pascal has actively sought to mend fences with the African-American community.

“Sony Pictures Entertainment has maintained one of the most impressive track records in the film industry for providing platforms for film properties that highlight the African American experience. The studio also has a solid track record when it comes to hiring executives of color,” a statement on the organization’s website reads.

Pascal’s departure from SPE comes after the unprecedented attack on the studio that became a global incident, with Obama declaring that the hack was perpetrated by North Korea whose leader Kim Jong-un was angered over his depiction in the Sony comedy.

“I have spent almost my entire professional life at Sony Pictures and I am energized to be starting this new chapter based at the company I call home,” said Pascal in a statement.  “I have always wanted to be a producer. Michael and I have been talking about this transition for quite some time and I am grateful to him for giving me the opportunity to pursue my long-held dream and for providing unparalleled support.  As the slate for the next 2 years has come together, it felt like the right time to transition into this new role. I am so grateful to my team, some of whom I have worked with for the last 20 years and others who have joined more recently. I am leaving the studio in great hands. I am so proud of what we have all done together and I look forward to a whole lot more.”

See a photo from her appearance below: