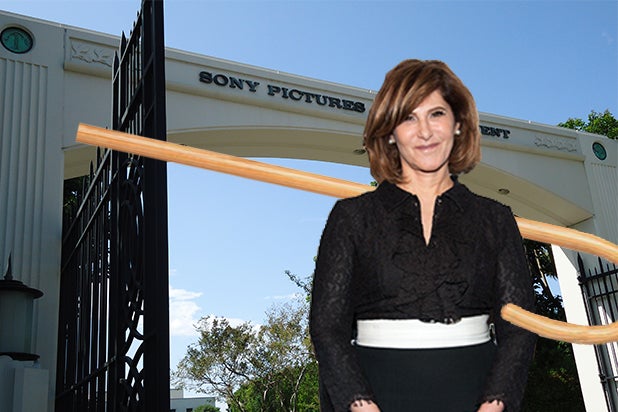 Amy Pascal is stepping down as Sony Pictures Entertainment co-chairman and chairman of the Motion Picture Group two months after a crippling computer hack brought the studio to a standstill and endangered the release of its movie “The Interview.”

Pascal will segue into launching a production venture at the studio in May, the company announced Thursday. The outcome is the denouement to an unprecedented attack on the studio that became a global incident, with President Obama declaring that the hack was perpetrated by North Korea, whose leader Kim Jong-un was angered over his depiction in the Sony comedy.

Pascal had been widely believed to be untenable in her position after hackers leaked the entire contents of her email, revealing embarrassing conversations about movie stars and even the U.S. president. Pascal was forced to apologize for the racially insensitive remarks.

“I have spent almost my entire professional life at Sony Pictures and I am energized to be starting this new chapter based at the company I call home,” said Pascal in a statement.  “I have always wanted to be a producer.  Michael and I have been talking about this transition for quite some time and I am grateful to him for giving me the opportunity to pursue my long-held dream and for providing unparalleled support.  As the slate for the next 2 years has come together, it felt like the right time to transition into this new role.  I am so grateful to my team, some of whom I have worked with for the last 20 years and others who have joined more recently.  I am leaving the studio in great hands.  I am so proud of what we have all done together and I look forward to a whole lot more.”

Before the hack of Sony, Pascal had long been one of the most powerful executives in the movie industry, though her magic touch in picking movies had lost its luster of late. Pascal joined Sony in 1988 and was named chairman of the Motion Pictures Group in 2003. She added the title of co-chairman of SPE in 2006.

Pascal was out at industry events on Wednesday evening, the night before the end of her long reign in Hollywood. She attended the red carpet premiere of her movie, “The Wedding Ringer,” starring Kevin Hart. And she later appeared at the African American Film Critics Association Awards in Hollywood’s Taglyan Center on Wednesday night, looking frazzled.  “She looked emotional,” an individual at the ceremony told TheWrap. “She worked the room very quickly and spoke a mile a minute. It was a bit manic.”

Pascal was present to support producer Stephanie Allain who was getting an award.

“Sony Pictures Entertainment has maintained one of the most impressive track records in the film industry for providing platforms for film properties that highlight the African American experience. The studio also has a solid track record when it comes to hiring executives of color,” a statement on the organization’s website reads.

Sony’s computer, email and entire phone system were paralyzed in the hacker takedown that began on Monday, Nov. 24. The hack led to thousands of documents containing sensitive information about Sony employees to be leaked to various online outlets and ultimately led the studio to scrap theatrical release plans for Seth Rogen-James Franco comedy “The Interview.”
The movie was ultimately released in a few hundred independent theaters and streamed online on multiple digital platforms.