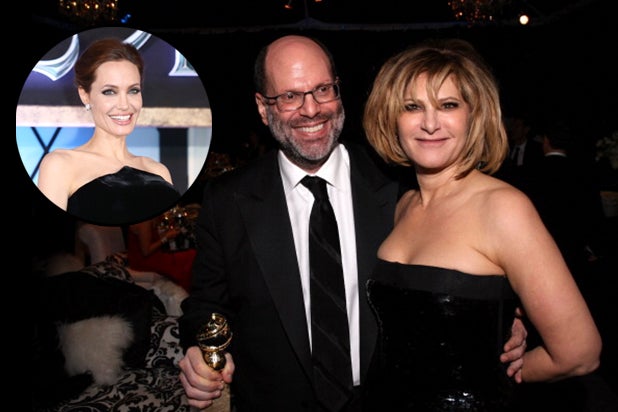 Sony hackers have leaked new emails revealing a heated exchange that detail the meltdown of Aaron Sorkin‘s “Jobs” — a script that suffered several high profile talent departures before winding up at Universal.

Also read: Sony Hack Attack: What We Know So Far - And What We Don't

Sony has not yet responded to TheWrap’s request for comment.

The narrative begins around anxiety over director David Fincher possibly being lured away by Angelina Jolie to direct a “Cleopatra” update, limiting his window to helm “Jobs” and its theoretical star Christian Bale. Rudin had no sympathy for Jolie’s desires to court Fincher, forcing Pascal to reflect to one colleague:

“Setting aside Rudin for a minute, Eric is mad about Fincher because he knows that after all this money and time we don’t have a draft that could actually land a director. That’s on him alone. So he’s hiding behind outrage when he knows full well Fincher could get picked off by a good script at any studio. That’s the truth.

Angie directed a movie and now she’s ready for Cleo and it’s not ready. Fincher is her silver bullet.

He’s perfect for Jobs and we don’t even know what Cleo is, only what we want it to be. That’s the same situation as Girl. A disaster.

Let’s take a breath. Neither movie is going anywhere. Next weeks business. I will work on meeting.

This doesn’t need to get crazy. We control the material. Jobs is awesome. Cleo can be a big commercial hit. They are ours. We don’t work for these people.”

The Eric identified in the Pascal email is likely Eric Roth, the Oscar winning screenwriter of “Forrest Gump” and previous Fincher collaborator for “The Curious Case of Benjamin Button.” And “Girl,” as it’s only referred to, is presumably Fincher and Sony’s last effort “The Girl With the Dragon Tattoo.”

Further requests from Jolie to meet with Fincher cause Rudin to warn Pascal she’d “BETTER SHUT ANGIE DOWN BEFORE SHE MAKES IT VERY HARD FOR DAVID TO DO JOBS.”

From there, Rudin stirs the pot by implying Pascal is starstruck by Jolie, wasting her time trying to make Fincher happen for “Cleopatra.” Rudin shares his own thoughts about Mrs. Brad Pitt, and doesn’t sugarcoat them:

I’m not destroying my career over a minimally talented spoiled brat who thought nothing of shoving this off her plate for eighteen months so she could go direct a movie. I have no desire to be making a movie with her, or anybody, that she runs and that we don’t. She’s a camp event and a celebrity and that’s all and the last thing anybody needs is to make a giant bomb with her that any fool could see coming. We will end up being the laughing stock of our industry and we will deserve it, which is so clearly where this is headed that I cannot believe we are still wasting our time with it.

If you want at some point to talk about this the way I pitched it to you — which was a responsible way to make this subject with some proper cover for us all, and a proper price — I’m happy to do it. I’m also happy to say all of this to Angie directly as I have no need to keep her happy and what I DO have is the right to determine for myself a) what I want to do with my own time and work, and b) what I want to do with material I incepted. I won’t be part of this idiocy and I’m not — and believe me, I am dead serious about this — spending literally ONE more minute occupying one single inch of brain space with it.

There is NO relationship with any movie star — ANY one — that requires our willingness to prostrate ourselves this way in the face of childish, irresponsible, willful and un-partnerly behavior. You don’t want David Fincher on the movie. It’s your right. Stop allowing yourself to be made to feel like a criminal for it.

That’s the finish of this chapter for me. I’m done.

Also on Tuesday, a tech website for self-identifying “alpha geeks,” Ars Technica, published what it claimed to be emails from Sorkin regarding casting. Bale dropped out of the running for the Jobs role on the heels of Fincher’s own departure. Danny Boyle stepped in and Sorkin started lobbying for actor Tom Cruise:

“I’ve gotten Scott and Danny to the point where they’re now a little interested in Tom Cruise. Though both remain concerned about his age (me less so) everyone agrees that he’s an actor who can really handle language (Lions for Lambs, Magnolia, A Few Good Men) and a movie star who feels comfortable owning the stage. He’s in London filming right now and Scott wants to get him a script to read and a meeting with Danny before Danny comes here to LA next week. I’ve been warned that he likes to bring in Chris McQuarrie to re-write but [Creative Artists Agency (CAA) agent] Maha Dakhil (who wants him in the movie) has assured me that won’t happen.”