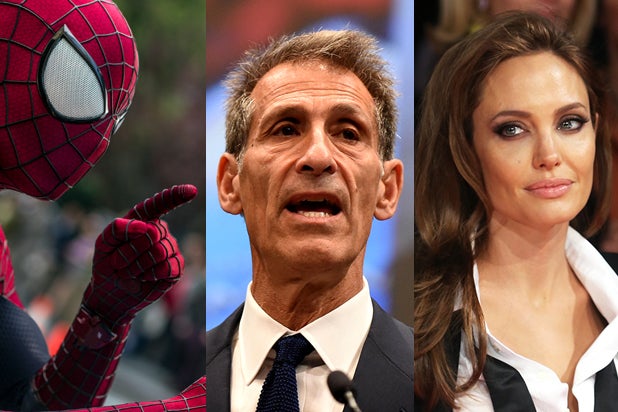 In the wake of Amy Pascal’s exit Thursday, Hollywood and Wall Street focused on the fates of her Sony Pictures Entertainment co-chair Michael Lynton, an aging Spider-Man and Angelina Jolie’s remake of “Cleopatra.”

What was next for them, or who would be named as Pascal’s replacement, wasn’t clear to industry insiders and analysts. But they were certain that the job will be a tremendous challenge for whoever steps in.

“They’re going to be playing catch-up to the other studios for years, because they don’t have a viable signature franchise and just about everybody else does,” said an executive at a rival film studio.

Most insiders are convinced that Lynton will need someone strong to step in as he digs the studio out from the hacking and subsequent leaked emails and business plans, and that Pascal will be productive in her new role as a producer. But several questioned whether Lynton had protected himself with Pascal’s departure and soft landing as a producer on the lot.

“The person responsible for this at end of day is Michael Lynton,” said a knowledgeable Hollywood executive. “When the CEO of any company has this kind of breach, he should take the fall. So the deal here is, ‘You take the fall Amy, and we’ll give you a producer deal.’ It’s all about protection.”

Whether Sony Corp.’s leader Kazuo Hirai and its board will stick with Lynton in the months to come remains to be seen. But if he does stay, his task looks tougher than ever.

The movie studio had a solid financial performance in 2014, ranking ahead of Universal and Paramount in terms of market share for the year. But last summer’s performance of “The Amazing Spider-Man 2” made clear that the franchise’s best days were behind it. It didn’t come close to $1 billion at the global box office, topping out with $709 million, and it underwhelmed domestically with a franchise-low of $202 million.

That left Sony searching for a replacement, even as rivals Disney and Fox were expanding their relationships with powerhouse Marvel Entertainment, Warner Bros. and DC Comics were building on their partnership and all were setting tentpole strategies for years ahead. Sony’s answer so far has been “Sinister Six,” a 2016 spin-off based on baddies that Spidey has faced in the comics.

The “Cleopatra” questions are the direct result of the emails between Scott Rudin and Pascal that were leaked by the hackers, in which the prolific producer called Jolie a “minimally talented spoiled brat.” That makes it a good bet that the actress, who directed last year’s “Unbroken” for Universal, will take the remake to another studio.

Wall Street shrugged at Pascal’s exit, and paid more attention to a rosy forecast issued Wednesday in Tokyo that lifted the stock. But if Sony can resuscitate Spider-Man, investors will care.

“That might do it,” said analyst Hal Vogel, who heads Vogel Capital Management, “but what would get everyone to really pay attention would be a spinoff.”

The idea of taking the film unit and possibly grouping it with Sony’s music division for a public offering isn’t new. Activist investor Daniel Loeb pushed the idea in 2012 after the studio suffered a string of misfires including big-budget bombs “After Earth” and “White House Down.”

A Sony executive told TheWrap on Thursday that wasn’t going to happen, but Vogel maintained it should, and soon.

“It was a good idea then and it is now, at least for the next three or four months,” he said. “After that, the volatility of the market is going to make it impossible.”

But Sony Corp. has historically backed its U.S. entertainment unit, and would in the near future, said Brian Wieser, senior analyst at Pivotal Research Group.

“Institutionally, they seem devoted to it,” Wieser said. “They’ve always gone to extensive pains to integrate as much as humanly possible. I’m sure if the right place came along, as CBS did a few years ago, they’d have to acknowledge it — but no transaction would ever take place this close to Pascal leaving.”