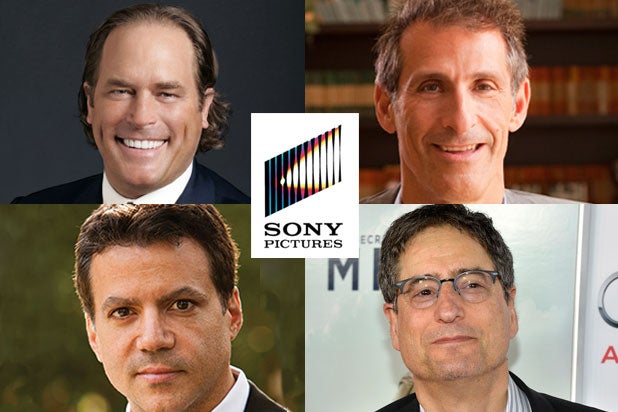 Sony Pictures Entertainment is likely to choose a successor to Amy Pascal from within the studio, and may change the company’s senior reporting structure before doing so, an individual with knowledge of the company told TheWrap on Thursday.

Pascal resigned from her position as co-chairman of the studio and chairman of the Motion Picture Group on Thursday, two months after a crippling computer hack brought the studio to a standstill and the leak of her entire email inbox led to embarrassing disclosures.

“We are pretty sure we have the bench strength internally to fill the appropriate slots,” a Sony executive told TheWrap. CEO Michael Lynton needs “to understand how the studio should be organized and what we have here. There are lots of different models — the Disney model, the way [Warner CEO] Kevin Tsujihara has set WB up — Paramount, Fox — they’re all slightly different.”

An altered structure could mean the various divisions at Sony reporting into Lynton, including Columbia Pictures, Tristar, Sony Pictures Classics and Sony Pictures Television. Disney’s various divisions like Marvel, Lucasfilm and Pixar run their own production while reporting into chairman Alan Horn.  At Warner, a triumvirate structure of international marketing and distibution, production and New Line report into Tsujihara.

The executives who would be likely successors to Pascal from within the company would be Tristar chief Tom Rothman, Columbia Pictures president of production Michael DeLuca, Sony Television chief Steve Mosko or Doug Belgrad, president of the Motion Picture Group.

Executives at Sony Pictures Entertainment maintain that Pascal’s decision to leave the studio after more than 25 years was her own. Pascal joined Sony in 1988 and rose to co-chairman of the studio in 2006.
But in reality, Sony has been struggling on the business side of late, with the reboot of the Spider-Man franchise leaving much to be desired, while activist investor Daniel Loeb agitated for the studio to be spun off of the parent company.
The executive dismissed any notion of a spin-off, saying that Sony Corporation based in Japan has reiterated on more than one occasion that the studio is “core to their overall strategy.”