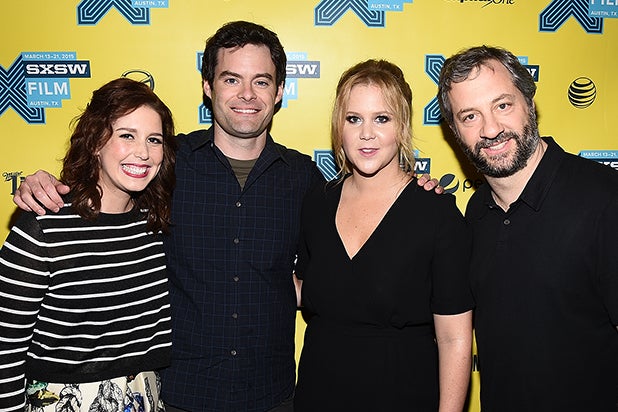 “Trainwreck” director Judd Apatow and the film’s cast answered fan questions in a panel from Twitter’s San Francisco headquarters on Friday, talking about everything from sex scenes with John Cena to star Amy Schumer’s supposed “feminist agenda” on her television show “Inside Amy Schumer.”

The Comedy Central series has been widely praised for its intersection of feminism and comedy, but Schumer shrugged off the idea that there might be any pressure on her to meet meet some feminism quota.

“I don’t feel any pressure to be pushing a feminist agenda. It’s just in me,” Schumer explained. “It’s just in me and comes out. It’s like poop.”

The movie’s official Twitter account called for questions using the hashtag #AskTrainwreck on Thursday, which were then collected for Apatow and cast, including Schumer, Colin Quinn and Vanessa Bayer.

A question directed to Apatow asked if working with athletes like LeBron James and musicians in movies was difficult. Apatow joked that, as the kid always picked last in gym class, he actually relished the opportunity to boss around and disrespect the athletes.

“A lot of the times those people are really excited to be there,” Apatow said. “So when LeBron shows up, it’s really exciting because we get to dominate him. He’s the scared one, and we’re the cocky ones.”

But Apatow had nothing but praise for James’s performance, noting that he and professional wrestler John Cena were the funniest people at the “Trainwreck” table read.

Schumer, for her part, said that having to do a sex scene with Cena was “like hugging a toaster.”

“Brooklyn Nine-Nine” star Chelsea Peretti sent in her own question, asking “can I be in it or is it too late?”

Schumer laughed, admitting they all know Peretti personally: “I think Chelsea was at the first table read. And it was unanimous to say, ‘Let’s keep her away from this project.'”

On the subject of women’s topics, Schumer also mentioned that she had an interest in covering female gamers, but couldn’t figure out a way to make the sketch work.

“It is a little scary, the things that trigger people,” she said. “Like, people go crazy over things you didn’t think they would, so we want to look into that a little more.”

Apatow and the cast are currently in the middle of their “Trainwreck” comedy tour, a seven-city stand-up tour promoting the movie, with all proceeds going to charity.

“Trainwreck” will be released in theaters July 17.