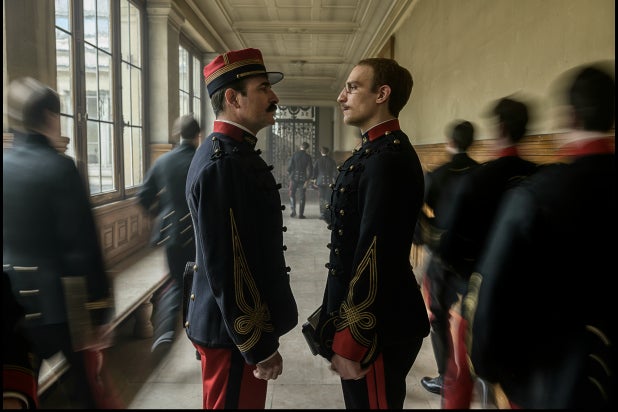 "An Officer and a Spy" / Venice Film Festival

Any controversy that might erupt over Roman Polanski’s decision to implicitly equate himself with one of history’s greatest victims of injustice is dissipated by the resultant film’s tepid listlessness. The filmmaker has scored any number of artistic achievements over the course of his controversial career, but with “An Officer and a Spy” (aka “J’accuse”), he fails to serve as his own Émile Zola.

Zola, of course, helped throw a spotlight on the French government’s cover-up after it unjustly railroaded Jewish army officer Alfred Dreyfus to Devil’s Island following a trumped-up court-martial that incorrectly branded him a spy. In telling the story of how that cover-up was uncovered and investigated, Polanski fails the main requirement of any historical drama: Keep the audience in suspense even when they already know how it comes out.

Polanski knows a thing or two about suspense, as one of the true heirs of Alfred Hitchcock, but his gift for tension and paranoia fails him here, even though this is a story rife with surveillance (19th century style), lies and suspicious agendas. “An Officer and a Spy” is squarely in the director’s wheelhouse, but it would appear that nobody’s home.

Case in point: After Zola’s famous “J’accuse!” newspaper article, in which he lays out the case for the cover-up and names the army officers involved, there’s a nighttime mob scene in which angry Parisians burn Zola’s books before painting anti-Jewish graffiti on a store window that they then shatter with rocks. In another film, Polanski would have made us feel the terror of the moment, the hatred and anti-Semitism of the mob and the potential for further destruction bubbling just under the surface. Instead, the scene begins and ends so quickly, with so many cuts within it, that all we’re left asking is, “Why paint graffiti on a window you’re about to break?”

Jean Dujardin stars as Georges Picquart, a superior officer of Dreyfus’ (and an unapologetic anti-Semite) who feels no emotion about seeing Dreyfus (Louis Garrel) stripped of his rank and carted off to prison. When Picquart is promoted to run the army intelligence division that caught Dreyfus in the first place, he’s dismayed to learn that information is still leaking to the Germans. And as he finds the source of the leaks, Picquart realizes that Dreyfus is innocent after all.

His superiors, of course, have no interest in reopening the Dreyfus scandal and even less interest in admitting that they got the wrong man, so they stonewall Picquart, sending him to the French hinterlands and eventually Africa to keep him quiet. But then Zola’s editorial prompts a libel trial and eventually a new court-martial for Dreyfus in a lengthy process that would eventually end in justice. And while the best historical dramas keep us engaged and in suspense even when there’s no mystery about the ending — “Apollo 13” remains an iconic example — “An Officer and a Spy” just ticks off each story development in a rote and flatly uninteresting manner.

Much of the film’s monotony can be connected to Dujardin, who can’t quite thread the needle of playing a stiffly upright military man without giving a stiffly upright performance. There’s plenty to admire here from a craft angle, from director of photography Pawel Edelman (a frequent Polanski collaborator) either using natural light or faking it brilliantly to the density of period detail, from the documents to the army uniforms to the pince-nez.

The film does offer the occasional splash of what Polanski does best, whether it’s a scene in a can-can bar that looks like a Toulouse-Lautrec painting come to life or jolting moments of sudden violence (the real spy attacking Picquart in the street, a random shooting) that stir the film from its torpor. But these exceptional moments serve only to underscore how lacking in adrenaline the rest of the film is.

After all the hubbub of “An Officer and a Spy” getting a slot in competition at Venice — in a year when that competition features just two films directed by women — it’s the hubbub that winds up being of most interest.