CBS, known for the past several years as the broadcast network with the most stable primetime schedule, introduced a schedule for next season that will have the most changes of any network.

In addition to adding three new dramas and two new sitcoms to its 2010-11 schedule, CBS dropped seven of its lower-rated or declining shows and moved four of its highest-rated shows to different nights in order to revitalize the schedule and ensure that it will be competitive in the years to come. 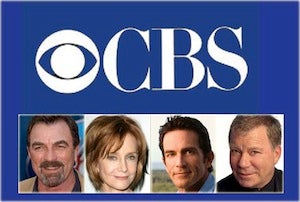 Kelly Kahl, CBS senior executive VP of primetime, described the moves as "the TV network circle of life," adding, "We could have just filled holes in our schedule, or we could totally revamp it. If you wait too long, you start to decline [in the ratings], and once that starts it’s hard to pull out of."
Kahl said you can describe his network’s moves as "aggressive stability."
Probably the biggest move was to switch its highly successful Monday night sitcom “The Big Bang Theory” to Thursday nights at 8, leading into a new William Shatner sitcom, “$#*! My Dad Says,” replacing reality hit “Survivor,” which moves to Wednesday nights at 8.
Kahl said CBS wanted to establish another night of comedy, and the feeling was that the NBC comedies in that 8-9 p.m. Thursday hour are vulnerable.
"We feel ‘Big Bang Theory’ has a broader audience reach than the NBC comedies," Kahl said. "We have a hot comedy [in ‘Big Bang’] and we saw an opportunity." If the hour sitcom block works on Thursdays, he added, the network could expand the block for another hour in the 2011-12 season.
The move is clearly an attack on NBC, similar to a successful move CBS made a decade ago when it moved a hot new drama, “CSI: Crime Scene Investigation,” from Friday to Thursday night to take on NBC’s more established comedy block.
CBS also moved “CSI: Miami,” which was winning its time period in the ratings on Monday nights at 10, to Sundays at 10, believing that it’s harder to establish a new show at 10 on Sunday night, the largest viewing night of the week.
In this case, “CSI: Miami” will be going against successful ABC veteran drama “Brothers & Sisters.”
Replacing “Big Bang Theory” in the Monday night comedy block will be new Swoosie Kurtz romantic sitcom “Mike & Molly,” which will air at 9:30. “Rules of Engagement,” a veteran CBS sitcom, also will start next season in the block after having been brought in at midseason the past couple of years. And new drama “Hawaii Five-O” will fill “CSI: Miami’s” old timeslot on Monday at 10.
"We have been developing [‘Hawaii Five-O’] for several years and this year we just hit the target with it," said Nina Tassler, CBS entertainment president, of the remake of this former CBS hit series.
CBS moved “CSI: NY” from Wednesdays at 10 to Fridays at 9 to try to reinvigorate Friday nights, television’s second lowest viewing night.
“CSI: NY” will lead into new cop drama “Blue Bloods,” starring Tom Selleck and Donnie Wahlberg. And replacing “CSI: NY” on Wednesdays at 10 will be new comedic drama “The Defenders,” starring Jim Belushi and Jerry O’Connell as colorful Las Vegas defense lawyers.
Kahl said a decision was made to aggressively program Fridays to try to bring viewers back to televison on the night. Ratings for all networks on Friday night have been steadily declining over the past decade and Kahl said, "If you stop programming the night aggressively, it will become a self-fullfiling prophecy and you’ll lose the night."
CBS won the night in viewers, but Kahl said some of the shows were getting stale. Two of the shows dropped on Friday night were “Ghost Whisperer” and “Numb3rs.” He said ratings on Friday night were down 20 percent this season from last season.
Kahl said moving “Survivor” to Wednesdays at 8 was a comfortable one for CBS because the network has aired it there each spring during the NCAA men’s basketball tournament and "its audience has followed it there. It has always done well there."
CBS tried to establish Wednesday nights from 8-9 for the past few years but viewership was not good. The two sitcoms that occupied the time period this season, “The New Adventures of Old Christine” and “Gary Unmarried,” were only averaging a 1.7 and 1.8 rating in the key adults 18-49 demo.
"That’s not a good place to be in," said Les Moonves, president of CBS Corp., adding, "As the No. 1-rated network, we felt we could do better."
What went into CBS’ decision-making process on dropping seven shows from this season’s schedule? In addition to low ratings or declining ratings for some of those shows, a lot of research was used that the network developed through its research facility in Las Vegas, where continuous viewer polling and tracking takes place.
David Poltrack, VP of research for CBS, told TheWrap, "We have regular tracking on every one of our shows. We do eight tracking studies a year. That research was not the determining factor in what was canceled, but it was a consideration of what shows were pulled or returned."
Poltrack said the network is "in continuous dialogue with our viewers," adding that canceling “Ghost Whisperer” and “Numb3rs” was a tough call.
"These shows had built up a strong core following and viewer support," Poltrack said.
CBS said a currently untitled “Criminal Minds” spinoff starring Forest Whitaker will be ready for midseason. That show could easily fit in the lead-out slot from “Criminal Minds,” Monday at 10, if new drama “Blue Bloods” falls flat.