20th Century Fox has acquired the movie rights to Agatha Christie’s mystery masterpiece “And Then There Were None,” the studio announced Friday. Morten Tyldum (“The Imitation Game”) is attached to direct from a script by Eric Heisserer, while Shawn Levy will produce the film after chasing the project for years.

I can’t blame Levy for his persistence. “And Then There Were None” is considered the greatest mystery novel of all time, having sold more than 100 million copies worldwide and influenced countless films since its publication in 1939.

“And Then There Were None” follows 10 strangers who are invited to a remote island by a mysterious individual named U.N. Owen — a.k.a., Unknown, get it? Once there, a taped message accuses each of them of committing terrible crimes in the past, and the guests begin to die one by one in accordance with a poem found in each of their bedrooms. By the end of the book, everyone is dead (so there are really NO SPOILERS in this piece, trust me) and the perfect crime has been committed.

I read the book when I was in high school, and it immediately became one of my favorites. I’ll sum up my fandom this way — I even bought the “And Then There Were None” video game for Nintendo Wii so I could see how the story was adapted for the gaming crowd. Not to brag, but I also own the graphic novel adapted by Francois Riviere and illustrated by Frank Leclercq.

Also Read: How Wes Craven Turned Me Into a Teenage Movie Pirate (Sort Of): An Appreciation

As I detailed in my recent remembrance of director Wes Craven, whom I wanted to direct an adaptation of “And Then There Were None,” I had already caught the screenwriting bug at age 12 after seeing “Scream.” Three years later, I set out to adapt Christie’s book — a daunting task for any teenager trying to make the freshman soccer team and keep his acne under control.

It should come as no surprise that I had no idea what I was doing and stalled out after the first act, but that’s beside the point. Over the course of nearly a decade in Hollywood, I’ve told any executive who would listen that my dream project would be an adaptation of “And Then There Were None,” and now it finally looks to be coming true at a studio that is already developing Christie’s famed “Murder on the Orient Express.”

Of course, “And Then There Were None” (don’t ask what the original title was) has been adapted numerous times, though the last significant version was a 1974 film starring Richard Attenborough and Oliver Reed. That film’s producer, Harry Alan Towers, previously adapted the book in 1965 and went back to the well once again for a 1989 version featuring Donald Pleasence on a deadly safari. 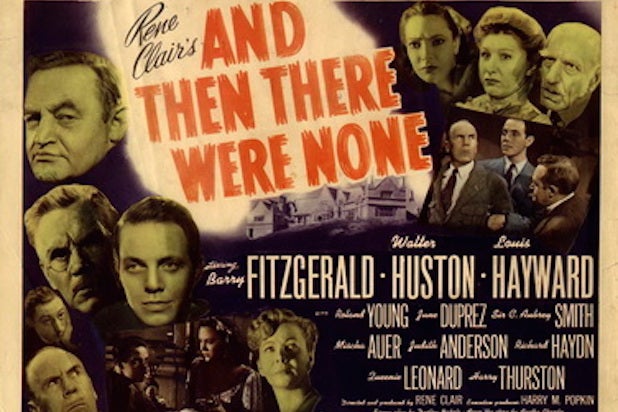 But as far as Teenage Jeff saw it, there were only two ways to go about adapting “And Then There Were None,” and with Fox hiring Tyldum, I think it’s clear which way they’re leaning. Hollywood could have chosen to go the “MTV route,” turning the book into the next “I Know What You Did Last Summer” and chasing the teen audience that loves movies like these, while making make characters like Dr. Armstrong and Judge Wargrave medical and law students, respectively.

However, Fox appears to be going the A-list route — fortunately, since the story is absolutely deserving of a starry treatment. This is exactly the kind of mid-budget adult thriller studios don’t make enough of anymore. 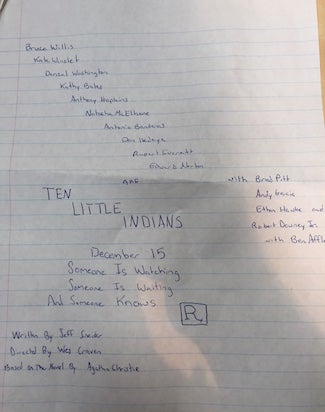 See the photo to the left? That’s a piece of paper from 15-year-old Jeff’s high school notebook. Don’t ask why I brought it out here to Los Angeles (perhaps to serve as screenwriting motivation?), just savor the awkward nostalgia. At least the tagline is pretty good.

My take on “And Then There Were None” was set off the coast of Massachusetts (naturally) and featured a framing device involving four Boston detectives (formerly of Scotland Yard) as well as The Bottle Finder — a man walking along the beach who eventually finds the bottle containing U.N. Owen’s confession letter and notifies the authorities. Then we’d flash back to the characters all receiving their invitations and making their way to Soldier Island.

The big question is whether Fox and director Tyldum will retain the original ending or change the identity of the killer for the sake of surprise.

Also Read: 'Game Change' Sequel: Who Should Play Obama, Romney and Everyone Else in 'Double Down' (Photos)

Below is a list of the main characters in “And Then There Were None” and who I wanted to play them in 1999, as well as who I’d like to see cast now. Let us know what you think in the comments section, where you can leave your own choices for these iconic roles.

VERA CLAYTHORNE
1999: Kate Winslet
2015: Jennifer Lawrence
Vera is the doomed hero of the story and should be played by a classic screen beauty. Going back to my original “poster,” I was surprised to find Kate Winslet aboard (hot off “Titanic”), as I always imagined Vera as Gwyneth Paltrow in my head. Since Tyldum is working with Jennifer Lawrence on his next film, “Passengers,” and she’s the most in-demand young actress in showbiz, I think she’d fit, but Brie Larson would also be excellent.

Either way, the character should start out fragile but gradually assert herself as a strong leader over the course of the film. Vera was a governess whose young charge drowned on her watch and who she only pretended to try and save for the sake of appearance. She let the boy die out of love for a man named Hugo, who quickly abandons her after sensing the evil she has done. Because Vera has little remorse for her actions, Hugo recounts the details of this story to another character in the book, earning her invitation to Soldier Island sealing her grim fate. Despite a glimmer of hope, guilt eventually catches up to her.

ANTHONY MARSTON
1999: Antonio Banderas
2015: Oscar Isaac
I always saw Marston as a handsome young playboy wearing sunglasses and a crisp white shirt that flutters in the wind as he drives an expensive red convertible. He should have a little flavor to him — someone Italian or Brazilian, like Rodrigo Santoro. Marston is accused of killing two children while driving recklessly, and his lack of remorse may explain why he’s the first to die. I like the idea of a rising star like Oscar Isaac, who plays the villain in Fox’s “X-Men: Apocalypse,” dying before the end of the first reel. He’d also be a strong fit for another character, Philip Lombard. Either way, can we find a role for him in this movie? Thanks!

JUDGE WARGRAVE
1999: Anthony Hopkins
2015:  Morgan Freeman
Wargrave is a retired judge and a supporter of the death penalty who stands accused of giving biased summation and jury directions, leading to the death of a man on trial for his life. As the oldest man on Solider Island, people look to him as a leader and a voice of reason, though like everyone else, he has secrets of his own.

GENERAL MACARTHUR
1999: Dan Hedaya
2015: Jack Nicholson
While it would be cool to pull Gene Hackman out of his self-imposed retirement and it’d be even cooler to see Tommy Lee Jones back in uniform after “Captain America,” the coolest choice would combine both of those options — Jack Nicholson, coming out of retirement and donning a military uniform 23 years after “A Few Good Men.” Macarthur is a retired war hero who sent his late wife’s lover, a younger officer, by assigning him to a mission that basically ensured his death. The General resigns himself to death, believing no one will leave the island alive.

EMILY BRENT
1999: Kathy Bates
2015: Judi Dench
Mrs. Brent is an elderly spinster who’s mean-spirited and set in her ways. She’s responsible for the death of her young maid, whom Emily rejected after she became pregnant out of wedlock, driving her to suicide. She’s a nasty old lady who confides in Vera Claythorne before her own death.

DR. ARMSTRONG
1999: Denzel Washington
2015: Denzel Washington
I always imagined Dr. Armstrong as an African-American character, and the fact that Denzel is still a strong fit for this role is a tribute to his staying power as one of Hollywood’s true movie stars. In the book, Dr. Armstrong killed a patient after he operated on her while drunk. He forms an alliance with the other educated man on the island, Judge Wargrave, though it doesn’t save either of them.

WILLIAM BLORE
1999: Bruce Willis
2015: Woody Harrelson
You could go a million ways with this role, but this one just feels right, as it would reunite Haymitch and Katniss for a very different game of survival. Blore is a former police inspector turned private investigator. He took a bribe from a dangerous gang to lie in court and help send an innocent man to jail, where he subsequently died. He’s supposed to serve as the “security” on Soldier Island but he’s not even able to save himself, let alone his fellow guests.

PHILIP LOMBARD
1999: Edward Norton
2015: Tom Hardy
Lombard is the most traditionally masculine character and I envisioned a subtle undercurrent of romance between him and Vera Claythorne, so that their final encounter hurts that much more. Lombard may be a soldier of fortune but he’s also a bit of a weasel, willing to do whatever it takes to survive, no matter whom he hurts in the process. He comes to the island armed and doesn’t argue when he’s accused of causing a number of East African tribesmen to starve. He correctly predicts the killer, but by then, no one believes him.

THOMAS & ETHEL ROGERS
1999: Rupert Everett & Natascha McElhone
2015: Jean Dujardin & Charlotte Gainsbourg
Ethel is the meek cook/housekeeper of the estate on Soldier Island and she’s married to the butler, Thomas, who also happens to be a bully. Together, they killed their elderly former employer by withholding her medicine just to collect an inheritance early. They need to project an air of class even though they’re technically the help for the weekend.

SIR THOMAS LEGGE & INSPECTOR MAINE (SCOTLAND YARD)
1999: Brad Pitt, Andy Garcia, Ethan Hawke & Robert Downey Jr.
2015: Matt Damon and Ben Affleck
I’m not sure why I expanded the Scotland Yard team from two to four back then other than a simple case of teenage indecision. While the 1999 list still works for me, my version of the story is moving to the Boston area, so naturally, Matt Damon and Ben Affleck would play Sir Thomas Legge and Inspector Maine. If I had to stick with a quartet I’d add Jeffrey Wright and “Homicide” veteran Melissa Leo to the team for diversity’s sake, and because they’re both incredible actors.

THE BOTTLE FINDER
1999: Ben Affleck
2015: Casey Affleck
Ben can’t play two roles, so how about casting his brother? After all, this is basically a glorified cameo, but it’s also crucial to the plot, for if U.N. Owen’s bottle is never found, then the truth would never be known. And that is what the book is really about — setting the “record” straight.