Tributes poured in for André Leon Talley, the longtime creative director at Anna Wintour’s Vogue who became a fashion icon in his own right.

Talley, who died Tuesday at age 73, according to his official Instagram account, was a towering figure in the fashion world in every sense. The 6-foot-6 Talley appeared at fashion shows and industry events — often alongside Vogue editor-in-chief Wintour — in outrageous looks that included capes, hats and bold colors and patterns.

“No one saw the world in a more glamorous way than you did,” designer and friend Diane von Furstenberg wrote. “The world will be less joyful. I have loved you and laughed with you for 45 years… I miss your loud screams… I love you soooo much.”

Kerry Washington was one of many Hollywood stars to pay tribute. “Oh Andre! Heaven is not ready for you darling!!!!!! The whole afterlife is going to be just too fabulous now,” she wrote on Instagram. 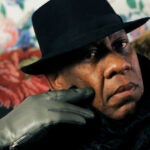 Actress and model Milla Jovovich mourned the loss of a “force of nature” and said she felt “lucky” to have encountered him multiple times in her career.

Fashion writer Roxane Gay called Talley “a beacon of style for so many.”

Editor-in-chief of British Vogue, Edward Enninful, thanked him for “paving the way,” writing on Instagram: “Without you, there would be no me.”

In addition to his four decades of work at Vogue, Talley gained fame as a guest judge on “America’s Got Talent” and the subject of a 2018 documentary, “The Gospel According to André,” that charted his path-breaking rise in a fashion industry where he was an outlier as a prominent and influential Black man who advocated for the place of beauty in everyday life: “Fashion is fleeting. Style remains.” 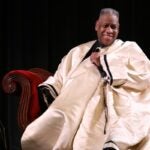 That film also captured Talley’s rise from a childhood in Durham, North Carolina, where he was raised by his grandmother, to the inner circles of the New York celebrity and fashion scene. Arriving in New York City in the 1970s, he became a receptionist for Andy Warhol’s Interview magazine and mingled with the likes of Halston and Karl Lagerfeld.

After working at Women’s Wear Daily in Paris, he joined Vogue in 1983 as news director under Wintour — and was later promoted to creative director and editor at large. He left the publication in 2013.

“I worked behind the scenes. I did it in dulcet tones, and I was persistent and tenacious,” Talley told Tamron Hall at a 2017 event at the Brooklyn Academy of Music. “I always assumed a very quiet, role. I didn’t scream and yell and shout….That was the best strategy, because that was the world I moved in. After all, it was Vogue, darling.”