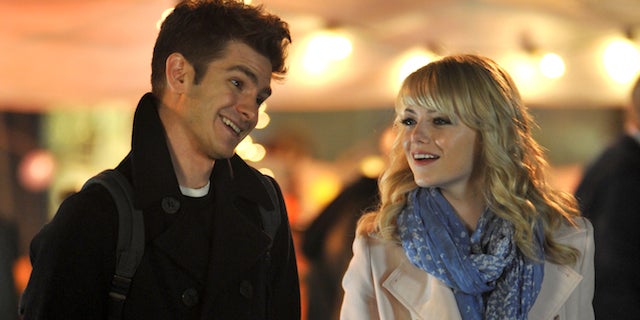 Andrew Garfield is very open to talking about Spider-Man’s personal life — just don’t ask him about his own.

The “Amazing Spider-Man” star’s lips were sealed when a reporter inquired about his relationship with co-star Emma Stone during an AP interview.

“How do you like working with Emma Stone, and is there a danger of taking work home?” Sandy Cohen asked Garfield at Comic-Con.

“Well, you’re assuming something there, which I will not be commenting about,” Garfield said.

The actor did, however, eleborate on his comments to EW earlier this month about the possibility of Peter Parker “exploring his sexuality” with men.

“I don’t know about the response. All I know is it’s an interesting question, more philosophically than anything,” Garfield explained. “Obviously making this version of Peter Parker suddenly bisexual or gay wouldn’t really make logical or dramatic sense.”

The actor previously asked: ‘What if MJ is a dude?’ Why can’t we discover that Peter [Parker] is exploring his sexuality?  It’s hardly even groundbreaking! … So why can’t he be gay? Why can’t he be into boys?”

The question, he says, was “a hypothetical kind” which was meant to provoke discussion as to “whether sexuality, race, any of those things makes any difference to the character of Peter Parker.”

“What Stan Lee created is an Everyman for every man. Especially the underdog. And especially for those marginalized, for those ostracized. And who is more ostracized as young teenagers than gay young teenagers?” Garfield added. “So it was more a philosophical question about that. And I long for the day where a comment like that wouldn’t make anyone batter an eyelid.”